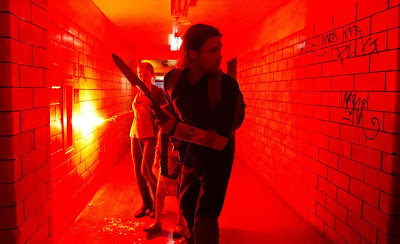 Ok, if you haven't already checked out my main entry on World War Z, you can find it here.

There's been a lot of talk about the changes to the movie's ending, so we're going to take a look at what might have been here. This necessitates spoiling some important events from the existing film so DO NOT read on if you have not yet seen World War Z and want to keep its surprises intact.


There were long delays for the film after producers expressed concerns that the ending was abrupt and awkward, resulting in the ludicrously vilified Damon Lindelof being brought in. Lindelof advised them that they would have to either find some way to shape the existing footage into something more coherent and dramatically satisfying or approve major reshoots to change the entire third act. The producers opted for the latter and Drew Goddard, co-writer of Cabin in the Woods, fleshed out a new scenario from Lindelof's suggestions.

The original script would have changed dramatically right around the point that Pitt's Gerry character and Israeli soldier Segen flee an overrun Jerusalem on a Belarusian jet plane. In the original story, the jet lands in Moscow, where Gerry has his phone confiscated by a thuggish soldier, eliminating his link to his family. As many of the refugees on the plane who are unfit for service are executed, Gerry is forcibly recruited into an anti-zombie squad.

The story would have picked up some time later when Geri and his fellow conscripts have gained proficiency in killing zombies and are clearing out tunnels full of them under Moscow. The experience leads Gerry to believe that they can utilize cold to weaken the zombies and in the midst of a giant battle in Red Square, he convinces the generals in charge to extinguish their fires and allow the zombies to freeze. After rescuing Segen from the same thuggish soldier who stole his satellite phone, they flee Moscow.

Gerry contacts his wife Karin and discovers that to survive, she has been forced to take up with the soldier (Matthew Fox) who rescued them in the beginning of the film and who can be spotted at a few points during scenes on the ship. They now live in a refugee camp in the warm and sunny Everglades under threat from the zombies. The soldier advises Gerry not come back for Karin. Gerry disregards his suggestion and leads Segel and other troops to Oregon with the intention of leading a mass extermination of zombies across the country, suggesting that a sequel would follow Gerry on his quest to eventually reach Florida and rescue his wife and children.

A set photo from that ending, with Gerry and Segen on a ship headed for the Pacific coast, can be seen below. 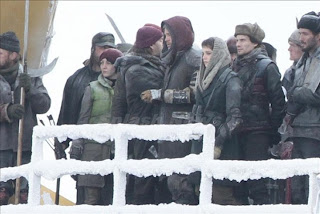 Reading it, we immediately recognize that Lindelof's assessment is correct as Goddard's revised ending is much tighter and elegant. The film as it stands allows for a sequel without being dependent on one for its resolution as the original ending would have been. We can assume Lindelof learned the dangers of taking that approach after the reaction to Prometheus.

It must also be recognized that the alternative weakness that Gerry deduces, that zombies will ignore people infected with terminal illnesses, makes a lot more sense given the viral themes of the film and is a more satisfying discovery, even if it does require some leaps in logic for Gerry to reach it. It's also interesting that after the giant scale of destruction we've seen to this point, the new third act closes things in and ramps up the suspense instead. While Gerry has fought and fled from thousands of zombies, the climactic moment for him comes down to opening a door and facing down one.

There are little echoes of the original structure in the film. Beyond the fleeting appearances of Fox, we also see some footage of a giant battle in Moscow on newscasts during the ending of the film and we can guess some of this is recycled from that lost sequence. I would love to see more of this alternative footage on the home video release, if only to get a sense of how it all would have played. The fact that so much of it apparently got to the shooting stage without anyone questioning the strange direction the film was taking is kind of mind-boggling, but not without precedent in Hollywood, where it seems like often no one has their eye on the big picture.

Kudos to Paramount for being willing to pony up the extra money to get it right, or at least closer to right, and kudos to Lindelof and Goddard for pointing out a better direction. A shame so much of this will remain in the dark for general audiences. It would be nice to see the internet give Lindelof a break every once and a while.
Posted by Cinemaspection at 7:35 PM