This in-joke casts the two collaborators responsible for a science fiction classic into a more combative relationship in this clever bit of prop design for 2010: The Year We Make Contact. 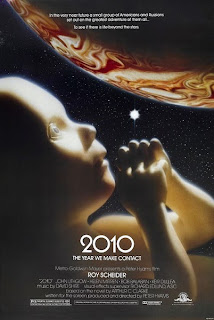 2010 is of course the sequel to the seminal science fiction epic 2001: A Space Odyssey from 1968. There was a lot of criticism thrown at Peter Hyams' 1984 follow-up for even daring to follow in the footsteps of such a classic, but the movie is actually pretty damn good, offering a more audience-friendly continuation of the story as mankind ventures into space and encounters an alien presence influencing its development.

One of the film's subplots involve rising cold war tensions that threaten to explode into all-out nuclear war. It was 1984 after all. As things comes to a head, there's a moment during a hospital sequence when a nurse is reading an issue of Time magazine. On the cover we see a stylized illustration of the U.S. President and the Russian Premier head-to-head:

And who are the models for those stern-looking political adversaries? None other than author Arthur C. Clarke and director Stanley Kubrick, the very duo who collaborated to produce the original film: 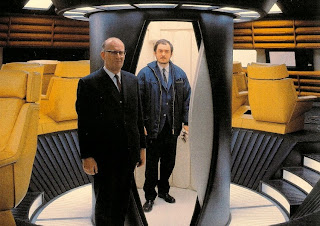 Happily, Kubrick and Clarke's working relationship was reportedly a positive one and never had the potential to bring about a nuclear holocaust. Kubrick's relationship with Stephen King... is another story.
Posted by Cinemaspection at 8:56 AM