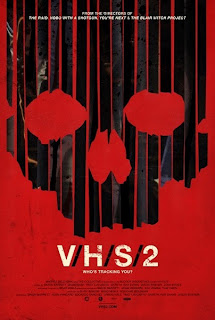 Anthology films, also known as portmanteau films, always seem to be a strangely tough sell to audiences given the short-attention-span of audiences in the current media landscape. The concept would seem to possess an obvious appeal; if you get antsy or bored with where a story is going, you only have to wait fifteen or twenty minutes to get something new and have another chance of being satisfied.

The horror genre has always had a fine tradition of anthology films, from Dead of Night back in 1945 to the Amicus films such as Tales From the Crypt and The Monster Club to Creepshow, which is still probably the most financially successful example of the style. 2012's V/H/S tried to one-up the format by merging it with one of horror's more successful sub-genres: the found-footage concept. The film's structure involved a framing story in which a bunch of criminal filmmakers are hired to steal a video tape from a dilapidated house, only to find a stack of them, each one of which contains a POV-framed short film by one of a stable of up-and-coming filmmakers.

Despite its minimal theatrical release and somewhat mixed reception, the movie made enough at the box office and from VOD sales to justify another installment, which by its crowd-sourced nature, has been assembled pretty quickly, even by horror sequel standards. While those who abhor the found-footage concept will probably not be swayed by anything on display here, the quality of the stories is much better and more fun, making V/H/S/2 (originally titled S-VHS, which would have been a fun gag for videophiles) the rare sequel that improves on the original.

For the purposes of this review, I'm going to take on each story one-by-one, but here are a few general observations. All of the segments do a good job of getting over one of the big pitfalls of found footage for many people: explaining why people would still be filming and not just drop the camera and run when creepy stuff starts happening. Most of the rationales for the continued recording are logical and let you forget about this sticky point.

The individual filmmakers don't go overboard to simulate the technical limitations of video as in the first film, cutting down on the intentional glitches and resolution problems to provide a much better-looking film overall. There's also a vast improvement in protagonists. Many complained about the likeability of the characters in the first movie but it's a lot easier to empathize with everyone here.

So let's get into specifics. Some mildly SPOILERY stuff to come so if you want to go in totally blank, you may want to stop here: 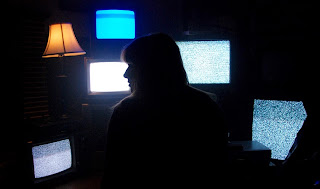 The framing story is, like the first one, the weakest element in the film, though at least our protagonists, two unethical private investigators hired to find a college student who's gone missing, aren't quite as blatantly foul and intolerable as the sexually-assaulting punks of the original. Armed with video cameras, the pair investigate the missing youth's house only to find what has already become the signature tableaux of the series: a dark room filled with multiple TVs and piles of videocassettes, each of which contain strange creepy videos the student had been rabidly collecting. While one of the investigators checks the rest of the house, the other begins watching the tapes, unaware that something else is watching them...

The framing segments of both films are written by Simon Barrett, who also takes over directing this time out. While neither is particularly innovative and both follow the same beats, this time Barrett at least presents a more definitive narrative, adding a few strange ideas to what little mythology the series has presented up to now and in the process offering something of an explanation for elements of the first film. It also includes a female character who isn't sexualized in any way, a refreshing change from the first movie, which yielded complaints of an unpleasantly misogynist bent. Barrett does spoil one of the story's most shocking make-up effects by lingering on it too long and caps things off with a very silly breaking of the fourth wall, but at least it does feel like an actual ending. 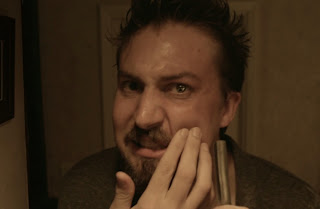 Adam Wingard, director of the framing story for the original and of the upcoming film You're Next, moves on to direct the first of the videotaped stories, "Phase 1 Clinical Trials," which plays out as footage from an experimental bionic eye implanted into a patient (played by Wingard himself) following an accident. Despite his misgivings about having his daily activities recorded for testing and research purposes, he tries to go back to his normal routine but finds his life disrupted by glimpses of ghostly figures in his apartment, suggesting the prosthetic has improved his vision in ways no one would want.

Wingard's entry borrows its familiar premise from the Pang Brothers' spectacularly effective chiller The Eye but the slow, creeping dread of that film is absent. In its place, we get a quick succession of shock scares which manage to keep us jumping but grow a bit numbing. The creepier ideas lurking in the shadows, such as the implication that the phantoms plaguing him have always been there unnoticed or the possibility they are part of the agenda of the company responsible for his implant, aren't touched on much. Wingard tries to pad things out by introducing a new character to offer a cursory explanation of what's happening but she's used primarily for a chance of some quick nudity before the story impatiently rushes to its frenetic climax and the queasy gag we can feel it's been building toward. 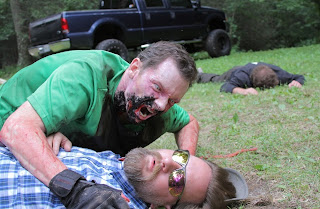 For the second story, two of the filmmakers behind the movie that energized the found footage style return to it as Gregg Hale and Eduardo Sanchez of The Blair Witch Project present their contribution "A Ride in the Park." This tape comes from a camera mounted on the helmet of a cyclist recording a joyride through a state park as he unknowingly pedals his way straight into a zombie apocalypse.

While zombies seem to be the omnipresent figure of horror these days, Hale and Sanchez manage to give us an interestingly subjective take on the idea that pivots in a unique direction around the mid-point when the story moves away from visceral shock to touch on more existential horrors. They utilize the first-person perspective well, setting up compositions that generate suspense, such as one scene where we watch two fellow cyclists investigate a body, of which we can only see a hand at the edge of the frame. As they debate about what to do, we notice what they fail to see: the hand is beginning to twitch, signaling big trouble for them.

As the story reaches its climax, they even manage to figure out ways to engender pathos for the story's protagonist despite the fact that by necessity he remains off-screen for most of the story. Aside from some stiff acting by some of the live people and a few awkward lines of dialogue, this one is well-made and emerges as my favorite segment of the film. 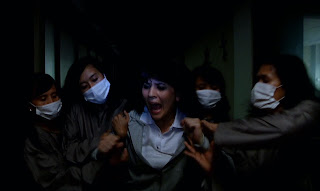 The next story teams Gareth Evans, director of the bone-crunching police thriller The Raid: Redemption, with Timo Tjahjanto, responsible for one of the better segments from another anthology film, The ABCs of Death. The resulting tape, "Safe Haven,"  is a bizarre tale of investigative journalists who have gained access to an Indonesian religious cult. Fitted with hidden button cameras, they try to uncover what's really happening behind the walls of the cult's self-contained compound, only to bear witness to the group's long-awaited day of reckoning.

Evans and Tjahjanto stretch the limits of the found-footage format to create a story filled with some jaw-droppingly weird images, often with little explanation or logic provided. While you can quickly get a sense of the overall direction of the plot, which contains echoes of Jonestown and the grisly fates of the NBC reporters caught in the events there, the specific scares are appropriately shocking and disorienting, especially in concert with the unnerving performance of Epy Kusnander as the cult's founder, known as 'Father,' who emerges as the stand-out character for the whole film.

Unfortunately, that disorientation can also be a problem, as the cutting between the various video feeds we're watching results in some confusion about which character we're with during some key points. The segment also runs a bit longer than it probably needs to and ends on a moment which some might find a bit too silly given the stark nature of everything before it. However, the tone and imagery ensure the creepiness of this segment stays with you. 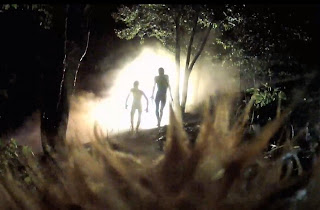 I can't give the title of this last story by Jason Eisner, director of Hobo With a Shotgun, as it would take away the surprise you might enjoy by going in cold as I did. However, I will say the segment starts with two brothers and their friends using their parents' absence and a video-camera to wage a war of pranks against their older sister and her obnoxious boyfriend. The fun turns frightful when the party is interrupted by mysterious figures laying siege to their home.

Though the characters are mostly bratty kids, I can't help but find something kind of charming about their crude but relatively harmless pranks, which evoke memories of 80s teen comedies intitally. Eisner finds a particularly unique vantage point for most of the segment and creates some very suspenseful moments, particularly as we see flashes of the intruders in the distance. The segment also has the most notable subtle scare of the film, the kind of 'did I just see that?' moment that the whole movie could have used more of, and utilizes sound effectively to keep viewers on edge.

On a somewhat SPOILERY note, I do have to warn animal-lovers that the last shot of this story contains what is easily the most disturbing and unpleasant image of the film, and it's a moment the segment would have been just as effective and more enjoyable without.

The V/H/S series offers a great showcase for rising talent and demonstrates that even directors not known for playing in the horror genre can offer innovative ways to scare us. I find myself surprisingly excited to see who they might get to participate in a third installment: Larry Fessenden? Jim Mickle? Juan Antonio Bayona? Jaume Balagueró and Paco Plaza? Ben Wheatley? The Soska Sisters? What new ways could such filmmakers twist the found footage style? Though the VHS format may be officially dead, V/H/S/2 shows the franchise that shares its name is still viable.

Now, how soon before we get the BETAMAX spin-off?

Ok, so thus endeth the review, now begins the discussion. What did you think? Agree? Disagree? Did I miss something worth mentioning? Leave your comments below.
Posted by Cinemaspection at 9:36 AM