This in-joke will be a trip back in time for children of the 1980s, as one of the iconic figures of the era sneaks his way into the computerized world of Tron. 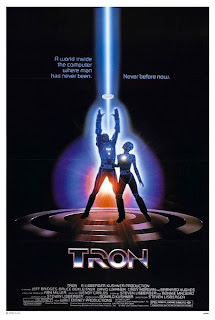 The moment in question comes after the big light cycle match, as our three digital heroes eliminate their opponents and escape the video arena. As the film's villain Sark (David Warner) peers at a scanner tracking their escape route, we see another familiar-looking denizen of the video games world:

Didn't notice him? Click on the picture to embiggen it and look again:

That's right, apparently the MCP was holding poor Pac-Man prisoner as well. If you listen closely, you can even hear his distinctive chomping noise during the scene.

No sign of Donkey Kong. They haven't built a circuit that could hold that monkey.
Posted by Cinemaspection at 6:00 PM