This in-jokes features not one but two cameos, as two nemeses face off again over thirty years after their original meeting. The film in question is the 1986 remake of Invaders From Mars. 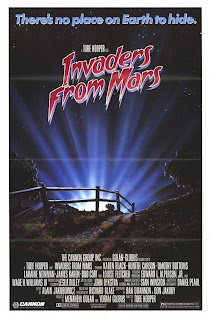 The film focuses on David Gardner (Hunter Carson) a young boy who's become convinced he's seen a alien spaceship land in the sand pit behind his house. His story leads to an investigation by the police, including one older cop who notes that he 'hasn't been here since he was a kid.'

Perhaps that's because the officer in question is played by Jimmy Hunt, who played that same young protagonist in the original 1953 version of the story:

But it doesn't end there. Later on David is hiding from various humans who are being controlled by the Martian aggressors, including that same cop. As the police search through David's hiding place, the basement of his school, they shine their flashlights on a strange object.

That object is actually the same prop used for the disembodied Martian leader that Hunt battled against in the 1953 film, as seen here: 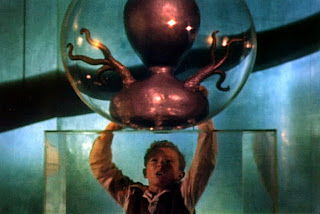 And here's the prop as it exists now as part of the memorabilia collection of film historian Bob Burns: 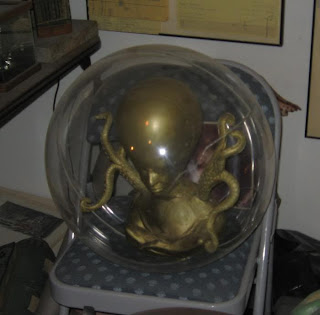 Posted by Cinemaspection at 9:14 PM