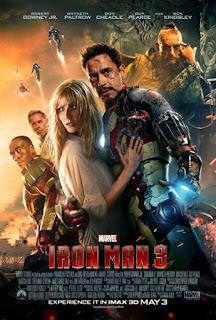 It's only May and yet according to the cinematic calendar, it's already time for the summer to start. And what better way to kick off the festivities than with the annual superhero epic or two? For the past few years, Batman notwithstanding, the comics-to-film superhero spotlight has been on Marvel, which has pulled off a complicated trick by translating their broad universe of superheroes to the big screen in one large interconnected continuity, culminating in the ultimate superhero team-up movie, The Avengers.

But after the epic scale of that film, will audiences settle for a movie with only one hero? Will the individual franchises Marvel has set-up for characters like Thor, the Hulk and Captain America avoid seeming small and trivial in comparison to the group franchise? And can the company, now operating out of Disney, successfully set-up the inevitable next Avengers installment while still delivering good, standalone stories for each character?

Based on the box-office success of Iron Man 3 thus far, the answer would seem to be yes to all of these questions. Iron Man is the series that kicked off Marvel's cinematic dominance of the genre, powered by Robert Downey Jr.'s inspiredly droll interpretation of its main character, billionaire inventor Tony Stark. After a somewhat shaky sequel, the series has gotten back on track with its biggest and arguably best entry yet, which acknowledges the wider universe Marvel has developed while keeping the focus on Stark himself.

Following the cosmic battle in New York that served as the climax for the Avengers, Stark finds himself beset by a neurosis no amount of shawarma can overcome. Plagued by insomnia and anxiety attacks regarding his experiences battling aliens, he spends all his time obsessively tweaking his armor and making various upgrades, neglecting girlfriend and corporate partner Pepper Potts (Gwyneth Paltrow), the very person he's desperate to protect, as he prepares for the next inevitable threat. 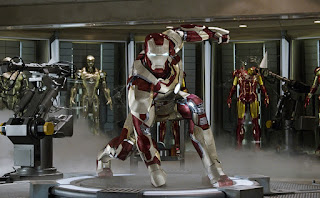 He doesn't have to wait long, as a terrorist mastermind known as the Mandarin (Ben Kingsley) begins striking at American interests abroad and at home using a form of explosive that baffles the authorities. Stark, eager for a fight against what he assumes is just another very human madman, finds his invitation to a grudgematch accepted but may have finally encountered an opponent beyond his abilities. Cut off from his friends, his finances, his technological resources, and his super-powered colleagues, Stark must fall back on his wits and inventiveness to take on the Mandarin's forces, which include an army of superhuman assassins.

One of the key factors in the success of the Marvel films has been the directors they choose to helm their projects, with such disparate filmmakers as Kenneth Branagh and Joss Whedon using their specific talents to bring these colorful characters off the printed page. Following Jon Favreau's departure from the director's chair amidst rumors of heavy studio interference on Iron Man 2, the studio turned to Shane Black, best known for writing action flicks such as Lethal Weapon and The Last Boy Scout.

After working so well with Downey on Kiss Kiss Bang Bang, a criminal underseen mystery homage that served as Downey's first real comeback role, Black is a logical and highly successful choice with an irreverent style that serves the light, fun tone of the series perfectly. His imprint is all over the film from the first metafictional scene, in which Downey begins narrating the story only to trip himself up and start again, a moment that makes clear Black has no qualms about having fun at our hero's expense. While Downey's Stark has always been a fun protagonist, Black extends this sense of humor to everyone, including the villains, in a way that flows naturally from each character and manages to avoid straying into outright goofiness. With everyone having such a good time, it's easy for the audience to follow suit.

Black also isn't afraid to take some chances with the conventions of the genre and push the story into some genuinely surprising directions, ones that may have some comics readers crying foul even as he pitches them some fan-service in the form of callbacks and references to the previous films, the other Marvel franchises and the comics. He also ensures that anyone who felt the first two movies were lacking in action doesn't walk away feeling cheated, crafting several great set-pieces, such as an attack on Stark's Cliffside mansion and a daring mid-air rescue, that up the stakes while always feeling like a natural extension of the story. 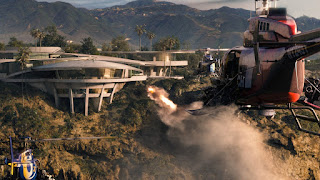 But the greatest aspect of the script Black and co-writer Drew Pearce have developed is the inclusion of a very natural and rewarding arc for its main character. It can be difficult for sequels, especially in this genre, to keep coming up with new directions to take the hero beyond offering yet another new bad guy to punch out. We've already seen Stark trying to redeem himself and dealing with his mortality, but here the greater scale of the Avengers spin-off and the problems it might cause are used to the story's advantage. Having seen the cosmic scope of a cinematic universe filled with aliens, gods and giant rampaging green monsters, the natural audience question becomes how this series can go back to its own specific, smaller level of reality. The film opens with Stark facing that same dilemma on a personal level. How does a man with an ego the size of a planet go back to his normal (at least for him) existence after facing the larger world Nick Fury warned him about?

For the answer, the movie delves into transhumanist ideas. With the arc reactor implanted inside his chest that keeps his heart from failing, Stark is already a cyborg to some degree. Becoming aware of such colossal forces so far beyond human experience brings with it a fear that he is too human to keep up with this larger universe. Consequently, he focuses on improving the armored suits that have come to define him and making himself even more machine, implanting new circuits under his skin that allow him to summon and control his armor remotely and join him even closer to his inventions. The cost is that it sets him at a greater distance from the rest of humanity, including Pepper, to the point where his machines become his proxy when dealing with others. This is a situation that shouldn't be unfamiliar to a generation whose social existence is structured around Facebook and tweets.

Downey is as great as ever, effortlessly tossing one-liners with the accuracy of missiles but also conveying how Stark's characteristically glib wit is as much armor as his metal suits, a cover to hide the fear that's eating away at him. His struggles with his own personal demons off the movie screen have always informed his performance but never more so than in this outing. It may also rankle the fans to find he spends so much of the film's running time out of his trademark metallic suit but it gives him a better chance to get into the action without the barrier of special effects, allowing us to appreciate the peril he's in. 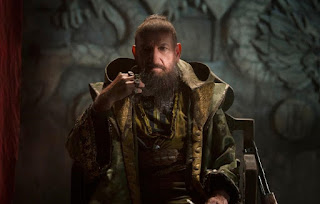 Speaking of upsetting the fans, this brings us to what has thus far proven to be the film's most controversial element: its primary villain, the Mandarin. Comic fans are notoriously adverse to changes in the established characters and continuity when it comes to movie adaptations and many have decried how the Mandarin, considered Iron Man's greatest nemesis, has been brought to the screen. But even the most die-hard reader would have to concede that the character wouldn't work in his original form, a Chinese scientist who uses recovered alien technology to further his plans for world domination. Conceived as a standard 'yellow peril' villain and a stand-in for the insidious spread of communism, the character is an anachronism and an uncomfortable reminder that Iron Man began as the establishment superhero, the heroic face of the military-industrial complex preserving freedom and democracy from falling to the domino theory. Considering how heavily this film has been marketed toward China, to the point of additional scenes being filmed specifically for the Chinese cut of the film, clearly some changes needed to be made.

Thus the film brings the Mandarin into the modern era as a multicultural terrorist who incorporates pieces of Eastern and Middle Eastern culture into his persona as a rabidly anti-American monster. I was initially a bit worried about Kingsley's performance as hinted at in the trailers, with his strange drawling accent, his tendency to phone in some of his paycheck bad guy roles, and the possibility that the character would be yet another anarchy-aimed psychopath like Heath Ledger's Joker. Happily those worries were unfounded. Kingsley is very game and fits right into the film's tone, while the character's surprising motivations offer a nice parallel to Stark as he was before his armor-aided redemption.

Continuing the transhumanist theme, we also get unscrupulous scientist Killian Aldrich (Guy Pearce), who has endeavored to upgrade humanity through genetic means, creating a race of unstable, destructive monsters who essentially become addicts to their enhancements, the perfect tools for the Mandarin's reign of terror. Pearce, equally at home in heroic or villainous roles, again proves to be a virtual chameleon. We meet him in a prologue as an awkward, crippled nerd desperate to get five minutes of Stark's attention. Years later, he's re-invented himself as the smooth, successful CEO of a shady think-tank, but the new and improved version of Aldrich is still tainted by the bitterness of the rejected man he was. 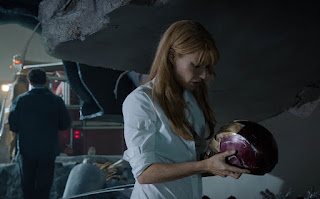 As for the returning cast, Paltrow's chemistry and verbal dueling with Downey remain as sharp as ever and she even gets a few chances to get in on the big action scenes. Don Cheadle returns as Stark's military pal and fellow armored hero Jim Rhodes and gets better opportunities to develop an onscreen rapport with Downey than he did in the second film. Despite the behind-the-scenes turmoil, Favreau is gracious enough to return as Stark's former bodyguard Happy Hogan, with his cameo extended into a more pivotal role and Paul Bettany again lends his voice to JARVIS, Stark's slightly snarky artificially-intelligent butler.

Among the new additions to the cast is the lovely Rebecca Hall as a fellow scientist wrestling with the perversion of her research. Despite a nice scene where she describes how the thrill of scientific discovery can lead to its misuse, her character feels slightly incomplete, as though missing some crucial scene. William Sadler gets the rare chance to play a good guy as the President although great character actor Miguel Ferrer feels underused in a bit part as the vice-president. James Badge Dale, who I've always found a bit flat in the past, exudes a cocky physicality as the Mandarin's quite hateable henchman while young Ty Simpkins keeps his role as a boy who befriends and aids Stark during his exile from becoming cloying or overly cute.

It's usually on reaching the third film that superhero franchises fall on their face, when story and character become secondary to larger and larger spectacle. Iron Man 3 bucks that trend and brings the series to a daring new place by keeping the emphasis on the man in the metal suit instead of the suit itself. It is Stark's humanity, the very thing he feels limited by, that makes him a hero still worth watching. Black, Downey and everyone at Marvel are astute enough to know that it takes more than repulsor rays, missiles, or jets to keep Iron Man flying, both onscreen and off.

Now we wait for the man with the hammer...
Posted by Cinemaspection at 8:05 PM