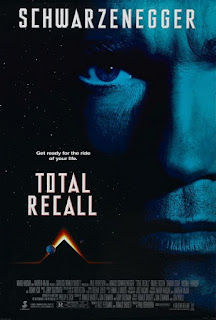 For those unfamiliar with it, the film involves Schwarzenegger's character getting false memories of a trip to scenic Mars. During his orientation at the memory travel agency Rekall, a technician asks if he'd like to have some alien imagery integrated into his dream vacation. A series of images speeds by on the monitor behind her: 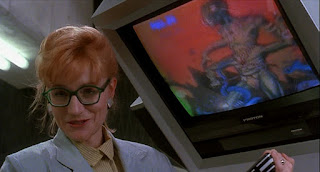 But who's that debonair multi-limbed fellow on the screen?

Why it's none other than Mars' (or perhaps we should say Barsoom's) original bad-ass warrior Tars Tarkas, one of the main characters from Edgar Rice Burroughs' influential book series focusing on the red planet that began with A Princess of Mars. Specifically, it's a retouched version of a painting by artist Michael Whelan used for the cover of the second book in the series, The Gods of Mars. 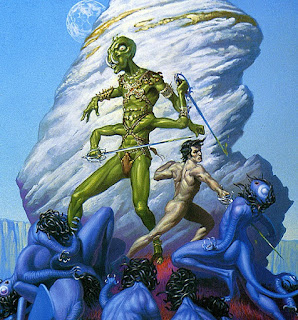 After many years in development, Tars, best pal and ally of Earth ex-patriate John Carter, got his own chance to shine on the big screen in John Carter, Andrew Stanton's sadly underappreciated adaptation of the series. Here's how he looked there: 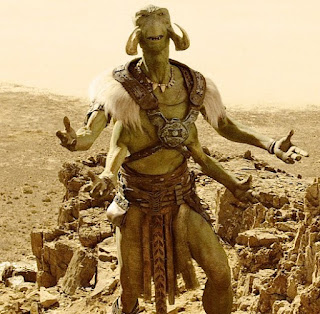 Forget getting Arnold to do Terminator 5... get this handsome devil a sequel!
Posted by Cinemaspection at 7:39 PM