This time we have a two-for-one from the same scene in the not-quite-celebrated sequel Robocop 2. One's a little dig at the studio, the other a concealed compliment for one of the film's effects crew. 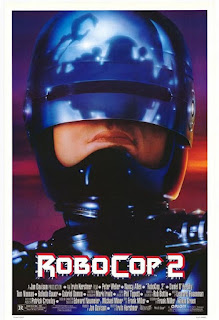 The scene, which involves Robocop being reprogrammed, features a POV in which a lot of text flies by very quickly. Among it, we can pick out a few choice bits, including a new directive for our metallic hero: 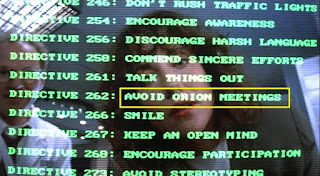 ﻿Orion Pictures, the studio behind the film's release, was encountering grave financial troubles by this point and one gets the sense the filmmakers had grown frustrated with dealing with them.

The other gag is a hidden one for computer programmers. The following numbers scroll by quickly: 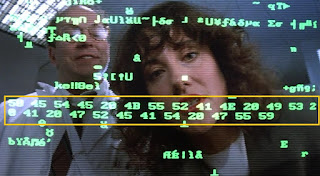 If you were to convert this sequence of digits into ASCII text, you get:

PETE KURAN IS A GREAT GUY

Peter Kuran, a noted visual effects artist and founder of the effects shop VCE Films, helped provide effects work for all of the Robocop films... and apparently he's a pretty nice boss.
Posted by Cinemaspection at 8:25 PM