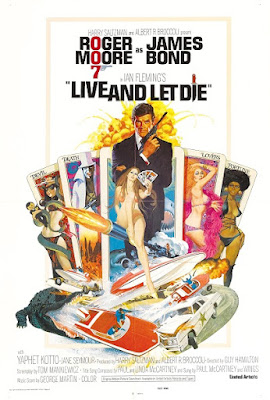 Bob 'Moviebob' Chipman joins us for another outing with James Bond, but this time we all get Moore than we bargained for... Roger Moore, as we take on one of the most offensive films of the 007 series with the blaxploitation-influenced thriller Live and Let Die. Listen as we grapple with the movie's incredibly racist plot and characters, take aim at Moore's portrayal of the venerable super-spy, and ponder why the filmmakers decided an obnoxious redneck sheriff should serve as the film's comic relief. Warning: Contains explicit language, spoilers, and lots of poorly-served character actors.

Our theme song is "Nostalgia TV" by Edward Jonathan Blakeley through Lynne Publishing.
CinemaSpection is now part of the Fireside Alliance. Check out the many awesome shows available through the network here.
Subscribe to our podcast here.
Listen to us on Stitcher here.
Interested in getting more from this episode? Check out supplemental material for this episode here.
Do you have a more clever way to corner the U.S. heroin market? Can you explain why the chief villain chooses to wear that terrible disguise? Have advice on how to get away from an island of crocodiles? Leave a comment and keep the conversation going.
Posted by Cinemaspection at 3:04 PM