Night of the Living Dead - Supplement

While we try to cover as much as we can in our episodes, there's always more to see, hear, and read about a movie that can enhance your viewing experience. If you enjoyed our episode on Night of the Living Dead, here's a few extra bits you might find interesting.. 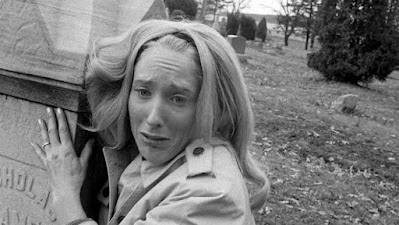 Because of a technical snafu where Continental Films, the movie's distributor, neglected to put a copyright notice on the opening credits after they changed the film's title (from Night of the Flesh Eaters), the film lapsed into the public domain for many years. As such, it is readily available for viewing on Youtube, Internet Archive, and various streaming services:

The film was produced through The Latent Image, a commercial film company created by director George Romero with many of the producers and technicians who worked on the film. Here's a selection of some of their dynamic television ads that made them a sought-after production house. The last one, a Calgon spoof of Fantastic Voyage, features Karl Hardman who played Harry Cooper in Night of the Living Dead:

Here's an excellent interview with director George Romero reflecting on his films and career:
The soundtrack for the movie effectively mixes and edits existing library music tracks to create its eerie score. Here's a collection of the library tracks used in the film:
And here's the trailer for the surprisingly effective 1990 remake of the film with a screenplay updated by Romero himself:
Thanks for listening!
Posted by Cinemaspection at 3:58 PM