While we try to cover as much as we can in our episodes, there's always more to see, hear, and read about a movie that can enhance your viewing experience. If you enjoyed our episode on Live and Let Die, here's a few extra bits you might find interesting... 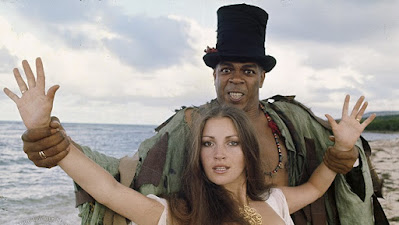 Here's the original trailer for the film:
While this is Moore's first appearance as James Bond on film, we noted this isn't the first time he's played the superspy. Here's Moore spoofing the character in a sketch for the comedy show Mainly Millicent in 1964, nearly a decade before he'd take on the character in the movies:
As we mentioned, the great Geoffrey Holder, playing henchman Baron Samedi here, made a name for himself as the spokesman for 7-Up in a series of commercials. Here are a few of those:
Here's a performance of the title song by Wings:
The song gained new popularity after it was covered by Guns N' Roses in 1991:
And Tim mentioned that master make-up artist Rick Baker's inflated head for Yaphet Kotto looked much better in reality than it did as presented in the finale of the film. Here are a few pictures of the head that Baker sculpted: 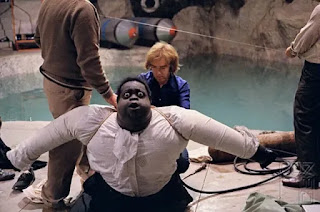 Thanks for listening!
Posted by Cinemaspection at 3:06 PM