As Halloween approaches, we see that our old hockey-mask clad friend Jason Voorhees exists in a bigger and even scarier world than we imagined as revealed by these two references in the (sort-of) final Jason film, Jason Goes to Hell: The Final Friday. 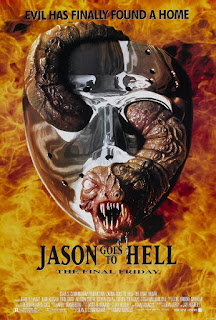 The film adds previously unknown (and not entirely comprehensible) backstory to the legend of Jason Voorhees, complete with a visit to the Voorhees house. Our nerdy hero Steven Freeman goes there looking for clues and discovers a rather familiar-looking book:

Just in case we weren't sure, Steven opens it up to reveal some equally-familiar drawings...inked in blood!

The book is of course the Necronomicon from Sam Raimi's Evil Dead movies, and what we're seeing here isn't a copy but allegedly the original prop used in the second film in that series. Perhaps a hint on how Jason came back... and keeps coming back... from the dead? 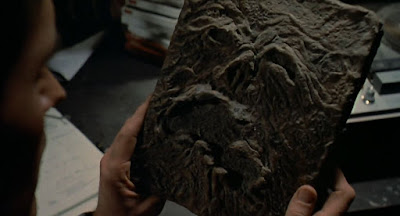 According to the film's DVD commentary, director Adam Marcus was loaned the prop by Evil Dead director Sam Raimi himself when he visited the set of Army of Darkness to check in with KNB Studios, who provided make-up effects for both films.

Reportedly, Tom Sullivan, the creator and owner of the prop, was not happy with Raimi lending it out without his permission.

But the Book of the Dead isn't the only dangerous object lurking in the shadows of the Voorhees abode. Near the end of the film, as bounty hunter Creighton Duke falls into the cellar, the camera tracks over to where Jason has stored one of his previous victims and reveals this conspicuous piece of luggage: 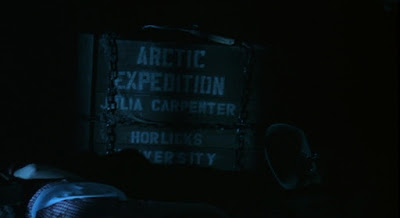 We can only hope no one gets curious enough to open that one or they'll have a bigger problem than an undead murderer in a hockey mask... as any fan of Creepshow could tell you. The box appears in that film as the title object of the story The Crate, where it houses a particularly voracious monster. 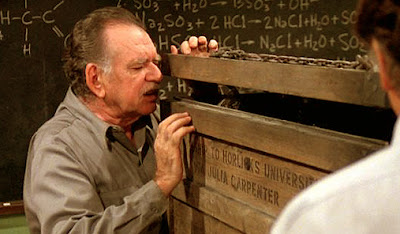 So, demon-unleashing books, boxes full of monsters... surely there can't be any other horrors lurking around Camp Crystal Lake? 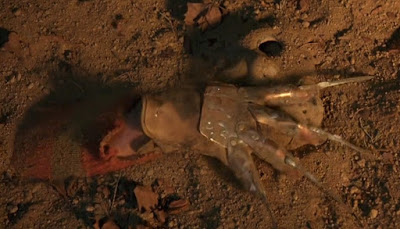 Posted by Cinemaspection at 8:59 PM