While we try to cover as much as we can in our episodes, there's always more to see, hear, and read about a movie that can enhance your viewing experience. If you enjoyed our episode on Carrie, here's a few extra bits you might find interesting... 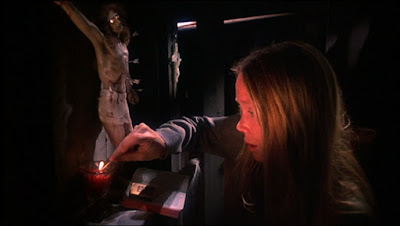 Here's the trailer for the film:

This was of course the first adaptation of a Stephen King novel. In this interview, King describes the night he and his wife first saw the film at a preview screening and the brilliance of the film's final scare:

In this interview, actress Piper Laurie describes her reaction tuo the script, working with Brian De Palma and Sissy Spacek, and getting an Oscar nomination:

As we discussed, an alternate version of the film's risqué opening locker room scene was filmed, much to the disappointment of viewers watching on network TV. Here's that censored version:

We mentioned the notorious musical inspired by the film. Here's the complete play as presented in its initial run in Stratford-upon-Avon, England. Forgive some of the rough picture and sound quality:

We mentioned the sequel produced 23 years later. Here's the trailer:

And here's a trailer for the 2013 remake with Chloë Grace Moretz and Julianne Moore:

Thanks for listening!
Posted by Cinemaspection at 10:49 AM