While we try to cover as much as we can in our episodes, there's always more to see, hear, and read about a movie that can enhance your viewing experience. If you enjoyed our episode on Frankenstein, here's a few extra bits you might find interesting... 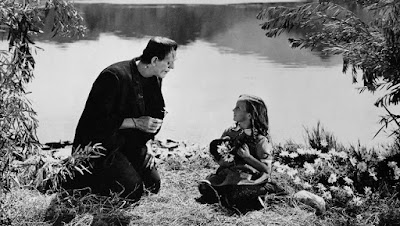 The Universal Frankenstein isn't the first film adaptation of Mary Shelley's novel. The first was this 1910 short adaptation by Edison Studios:

Of course, the film made a star out of the great Boris Karloff. In this clip from this is This Is Your Life, Karloff gets a visit by the make-up master responsible for the Frankenstein creature, Jack Pierce:

There have often been questions of what the make-up would have looked like in color. This test footage taken on the set of Son of Frankenstein reveals that the make-up had a vivid green hue, while Karloff gets to clown around and take out some of his frustrations regarding the lengthy make-up sessions on Pierce.

Although Karloff only played the creature onscreen three times, he continued putting the make-up on off movie screens. In this fragment, Karloff makes an appearance in character at a charity ball game:

And here, in the last time he would put on the make-up, Karloff appears with fellow horror icons Peter Lorre and Lon Chaney Jr. in a special Halloween episode of Route 66:

We mentioned how Karloff wasn't the first choice to play the creature, but Dracula star Bela Lugosi was initially considered. Here's an advance poster for the film when Lugosi was still attached to the production, which may give hints about how the creature was originally intended to appear. Note also how the beams emanating from its eyes resemble the image appearing the film's opening titles: 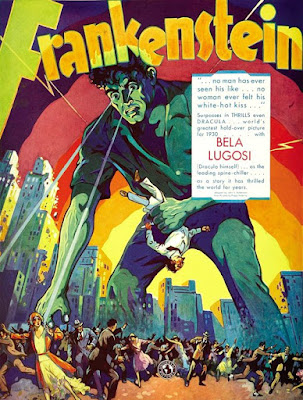 The film was followed up its tremendous sequel, Bride of Frankenstein, which reunited actors Karloff, Colin Clive, and Dwight Frye with director James Whale. Here's the trailer:

Posted by Cinemaspection at 6:33 PM