And STOP... Hammer time! Unfortunately, this time we're prying open one of the venerable studio's less shiny sarcophagi as we look at The Curse of the Mummy's Tomb. 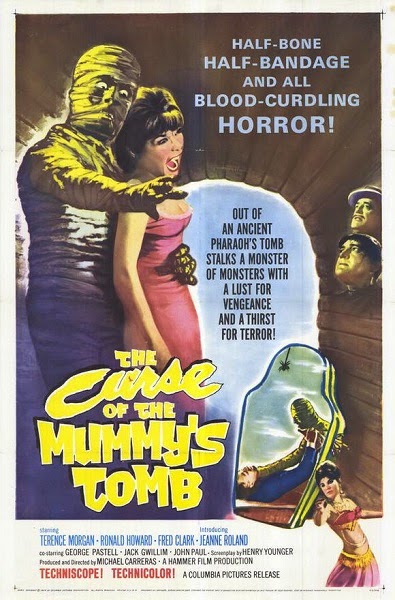 Hammer had an excellent run of Gothic horror films in the 1950s and 60s, wiping the dust off monster properties such as Dracula and Frankenstein and dressing them up in sumptuous sets and costumes, vibrant color cinematography and a bit more blood and sex than audiences could have enjoyed during these character’s Universal Studios incarnations. But as with Universal, when producing monsters in bulk, inevitably some burn-out sets in. As a follow-up to Terence Fisher’s excellent retelling of The Mummy, Curse of the Mummy’s Tomb has little to add to that film’s stylish experience, content to lumber about as a lifeless retread.

The opening shot deftly conveys the opening of an ancient tomb, that of Ra, son to an Egyptian pharaoh. The British/French expedition behind the excavation is rocked by several upheavals, including the violent murder of team leader Eugene Dubois (Bernard Rebel) by Egyptian rogues and the abrupt decision of the enterprise’s financial backer, American showman Alexander King (Fred Clark), to take the artifacts on a cheezy road tour across the world rather than donate them to the Cairo Museum. The expedition’s local contact Hashmi Bey (George Pastell) warns there may be grave consequences to removing Ra from his home, but his objections go unheeded.

Many of the key personnel in the Hammer productions are missing here. You won’t find Christopher Lee, Peter Cushing, Michael Gough or Ingrid Pitt anywhere. Alas, their replacements give merely perfunctory performances. Howard makes a rather tedious hero while Roland ‘s Jeanne comes across as frustratingly dim and shallow, a characterization not aided by a bad dubbing job or a clumsy script that has her breezing past her father’s death as though it were a momentary disappointment rather than a traumatic event. Clark at least has a bit of fun as the uncouth huckster American. Morgan’s performance is similarly entertaining for different reasons, as his character proves to be as blatantly suspicious as Timothy Dalton in Hot Fuzz, yet none of the leads seem to notice. Finally there’s Dickie Owen taking over as Ra himself. As compared to Christopher Lee’s bandaged juggernaut, Owen is unsurprisingly disappointing. His undead perambulating bears an uncomfortable resemblance to the shambling gait of a toddler with a full diaper.

The only actors familiar from previous productions are Michael Ripper in a tiny role and Pastell, who ends up giving the most interesting performance. At first glance, his character seems to be a repeat of the menacing Egyptian he played in the previous Mummy film, but we discover Bey to be more reverent than fanatical. When faced with the re-animated corpse of Ra bearing down on him, Bey reacts not with terror but with calm repentance for his role in desecrating his tomb, providing the film’s stand-out moment, particularly since most Egyptian characters in these movies are portrayed merely as bloodthirsty zealots.

Terence Fisher’s director’s chair has been filled by longtime Hammer producer Michael Carreras, who doesn’t prove quite skilled here as in his former capacity. Several moments hint at some real suspenseful potential (a eerily quiet moment in which Ra lurks behind some curtains comes to mind) only to have the final execution prove flat and awkward. The camerawork lacks dynamism and the script meanders. It’s nearly an hour before we even see Mumm-Ra in action and by then, the film feels as somnambulant as he does.

The script does come up with one other potentially interesting idea when we finally learn just what Beecham’s motives are, but the possibilities opened up by this revelation are left unfortunately unexplored, leaving this film with little to offer. Simply having an actor march around in bandages while characters blather on about curses isn’t enough and rather than instill terror in its audience, Curse of the Mummy’s Tomb instead leaves us with the desire to go back and re-watch Lee and Cushing in the earlier film again.

Trivia tidbit: Score aficionados may notice that much of the film’s most dramatic music cues are in fact recycled from Fisher’s earlier film, again emblematic of this film’s dilemma.

Posted by Cinemaspection at 9:13 PM