Let's start off with a slight but stylish shocker from the grand canon of Universal Monsters, Man-Made Monster. 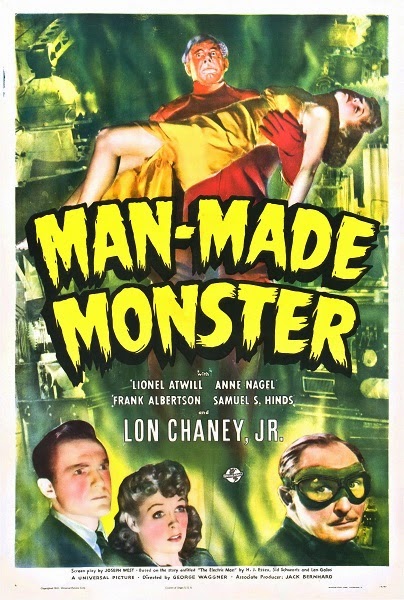 On a stormy night a bus (actually a decent-realized model) skids out of control into power lines, an accident that results in the electrocution of everyone aboard save amiable carny showman Dan McCormick, whose jolting routine as Dynamo Dan appears to have given him a higher tolerance to high voltage. This lucky turn of events delights scientist John Lawrence (Samuel S. Hinds), who convinces McCormick to aid him in his studies of bioelectric research.

Unfortunately, Lawrence's unscrupulous colleague Paul Rigas (Lionel Atwill) has other ideas of how their work can be applied, such as using electricity to create a stronger, more obedient form of higher being. He secretly exposes McCormick to higher and higher doses of current, turning our jovial protagonist into a super-charged zombie who can kill with a touch.

Throughout his career, Chaney has seemed to specialize in portraying doomed, tortured characters, a image that would he solidify through his breakout role in The Wolf Man, also directed by George Waggner, the very next year. Thus it's a bit of a shock to see him playing such a jolly, friendly guy in the first half of the film and makes it all the more tragic to see how Rigas' unethical experiments suck the life out of him, turning him into a strung out voltage junkie. But unlike Lawrence Talbot, Dynamo Dan never seems to be aware of his situation and numbly cooperates with his own destruction, lacking agency that might make us invest in his plight further. As he degrades into a mindless automaton with luminous head and hands (a nifty animation effect for the time) and an expression like he just had ice water dumped down his shirt, we get a preview of the lumbering menace Chaney would bring to his versions of the Frankenstein monster and the Mummy.

Rigas and Hinds' debates about the aims and morals of their work are peppered with 'mad science' platitudes so timeworn and blatant they're almost charming. For all his ranting about the lesser men and fools standing in the way of progress, Atwell is blessedly restrained for the most part and manages to conjure considerable levels of calculated nastiness throughout the film's slim running time. Meanwhile, a subplot involving Hinds' daughter (Anne Nagel) being courted by a nerdy reporter (Frank Albertson) eager for McCormick's story feels like a misstep; Albertson makes for an unimpressive hero and strengthening Nagel's interaction with McCormick would have heightened the drama.

As a low-budget flick from 1940, Man-Made Monster is obviously not going to inspire chills for a generation raised on more intense, blood-soaked fare, but Waggner's direction at least gives it some moody visual punch, particularly during Rigas' lethal treatments and McCormick's brief but lethal rampage. It also suggests a possible origin point for characters such as Spider-man baddie Electro and Horace Pinker of Wes Craven's Shocker. While nowhere near the level of Frankenstein or Dracula, it's good for a fun jolt of nostalgia from a golden age of monster movies.

A bit of trivia: When distributor Realart got the re-release rights for some of the Universal flicks, they retitled this film Atomic Monster, leading producer Alex Gordon to consider legal action as he had a similarly-titled project in the works. He sent his lawyer Samuel Z. Arkoff to negotiate the matter with Realarts' advertising exec James H. Nicholson, a meeting that would later result in Arkoff and Nicholson forming the legendary production company American International Pictures. A hearty thanks to Dynamo Dan for bringing about that auspicious meeting
Posted by Cinemaspection at 4:38 PM