This time, everyone's friend to the end clambers back for more play-time in Don Mancini's Curse of Chucky. 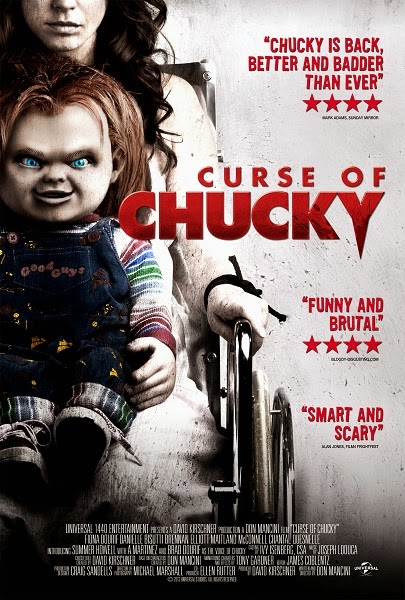 When we last caught up with the baddest Good Guy to come off the assembly line, Chucky had settled down with a wife and child and seemed resigned to ending his franchise in a blaze of campiness. For the first forty minutes or so of Curse of Chucky however, it feels like original Child's Play writer Don Mancini and producer David Kirschner are going to succeed in pulling the series back from the comedic excesses it had drifted into and actually make their diminutive antagonist scary again. Unfortunately once Chucky actually comes to life, the movie does the opposite.

This time Chucky is mysteriously mailed to the home of Nica (Fiona Dourif), a young paraplegic living in strained circumstances with her mother Sarah. It's isn't long before Sarah is dead, an apparent suicide, and Nica's house is invaded by her sister Barb (Danielle Bisuti) and her family. While Barb pressures Nica to let them sell the property, her daughter Alice quickly latches onto Chucky. But games of hide-and-seek give way to more sinister fun as a series of nasty accidents plague the household.

The first half of the film shows an admirable patience for a movie this far into a franchise. As they unwrap the box containing Chucky (who's been subtly redesigned to look even more off-putting in his conventional doll mode), we obviously know what follows. Yet, Mancini remains coy about showing us his miniature monster in action until the mid-point, gradually teasing us with what he's up to and gearing us up to see him in all his glory. But it turns out there may be another more practical reason for keeping the title character out of sight for so long.

Child's Play was released in 1988. So how is it that after 25 years worth of technical advances, Kevin Yagher's puppet effects from that film hold up far better than what's on display here? Chucky, enhanced with unconvincing CGI, often looks stiff and awkward in his movements and his tweaked design just looks undefinably askew. Even Brad Dourif's vocal performance feels constrained, as though the rhythm of his speech had to be modulated to fit the limitations of the facial animatronics.

After a considerable effort to focus on suspense (a dinner scene in which someone's dish has been dosed with rat poison is a highlight), the film succumbs to the more outlandish tendencies of a slasher sequel in its violence. The joy of the original film was the way in which it mined scares by treating a ridiculous premise with total dead seriousness. Mancini doesn't bother, content to allow the often fanciful gore effects to take over. Additionally, the build-up of tension between the sisters and their family conflicts is sabotaged as the characters, particularly Barb, become shrill cartoons in the back half. As though it felt a need to prove its legitimacy, the script also bends over backwards to reference and even retcon the events of the original films, which gives Dourif a chance to appear onscreen again (looking a bit like Tommy Wiseau under a wig and make-up intended to take off the years) but presents a backstory that doesn't feel consistent with Chucky's sleazy personality as previously established.

Worst of all is that Fiona Dourif's impressive lead performance feels wasted once we reach the mean-spirited finale. In a showing that suggests acting talent may be genetic, she creates a strong-willed, resourceful protagonist with depth beyond the confines of the script. As horror heroines go, she deserves better.

Speaking of wasted opportunities, it should also be noted that following a series of false endings, there is another brief scene after the credits that hints at a much more interesting direction the film might have gone, Perhaps Mancini is trolling for another sequel and we might still get the return to form he intended here... or maybe Chucky should go back in the box for a while.
Posted by Cinemaspection at 7:58 PM