Now we're getting into the really scary stuff... MUSICAL THEATER!!!! Oh, and there's a killer on the loose too in the campy mash-up Stage Fright. 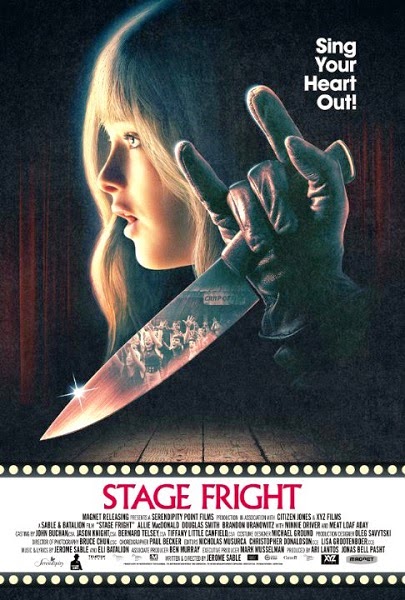 It's been ten years since theatrical diva Kylie Swanson (Minnie Driver, riffing on her Phantom of the Opera role) was brutally murdered following a performance of the hit musical "The Haunting of the Opera." But her mother's violent end hasn't snuffed out the lyrical dreams of daughter Camilla (Allie MacDonald). As she toils in the kitchens of Center Stage, a musical theater camp, she harbors her own aspirations for the spotlight.

When Swanson's former producer and the camp's owner Roger McCall (Meatloaf Aday) decides to mount the show again as the camp's showcase piece in a bid to regain Broadway's attention, Camilla sees her chance to follow her mother onto the stage. But someone at camp to out prevent the show from going on and as opening night approaches, campers and staff start meeting gruesome ends. Will Camilla face the same curtain call as her mother?

A defiantly ridiculous fusion of slasher and teen musical, Stage Fright feels like Glee gone giallo with numerous winks to both slasher movie and musical conventions. I admit my viewing companion was better at catching the musical gags, including posters for productions such as "Les Producerables" and "Arkansas" and characters based on notable stage productions. On the horror side, the camp setting evokes the Sleepaway Camp movies, we get direct homages to Carrie and the Halloween series, and close-ups of the black-gloved killer delicately setting up unpleasant ends for his victims brings back memories of Argento.

Even as it's sending up the stage culture, there's a refreshing lack of mean-spiritedness to the satire. We get some of the notable archetypes but they're all so cartoony it's hard for anyone to take offense; There's the hipster director (Brandon Uranowitz) who commits the twin sins of cultural appropriation and trusting his libido to cast his leading lady, the male singer in obvious denial about his sexuality, and the catty rival diva (Melanie Leishman) who will resort to anything to snag the lead. Sure, they're all easy targets but there are laughs to be had seeing them thrust into a different genre that's just as broad and over-the-top, if a bit bloodier.

Alas, the mystery of the killer's identity isn't quite as satisfying to figure out despite the gallery of suspects. They include Camilla's dour brother (Douglas Smith), who shows his nonconformity by speaking rather than singing his dialogue, a creepy, Camilla-obsessed technie (Kent Nolan, giving a youthful spin to the Michael Shannon glower), and McCall himself, who gets a great number in which he points out how theater can overcome any problem, even an untimely death or two. At least the killer's kabuki-inspired costume is distinctive enough and his heavy-metal rants make for a fun musical counterpoint as well.

I'm always a bit leery of films that seem overzealous to be embraced as cult classics, but even without a whole lot of substance to it, there's such breezy fun to be had here I'm less inclined to tear the movie down than I might ordinarily be. Like its unlucky campers, Stage Fright is so eager to please an audience and displays such joy, if not always skill, through performance that despite its shortcomings, it earns a begrudging slow clap.

Posted by Cinemaspection at 6:32 PM