You Only Live Twice - Supplement

While we try to cover as much as we can in our episodes, there's always more to see, hear, and read about a movie that can enhance your viewing experience. If you enjoyed our episode on You Only Live Twice, here's a few extra bits you might find interesting... 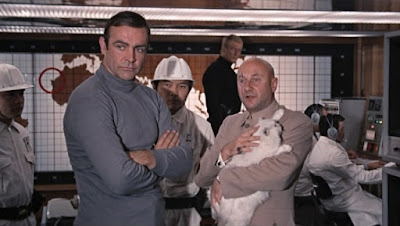 Here's the main title song, as performed by Nancy Sinatra:

The song's opening notes were re-used by Robbie Williams for his song Millennium, which features a hilarious James Bond-style spoof video:

While Donald Pleasance plays Blofeld in the film, the shooting began with Jan Werich playing the character before he was replaced, as it was decided he was not threatening enough. Here are some shots of Werich in costume:

As we noted, the film's most distinctive henchman is played by famed wrestler Peter Maivia, the grandfather of Dwayne "The Rock" Johnson. Here's the retrospective of his career that played when he was inducted into the WWE Hall of Fame:

Bob noted the amazing career of real-life ninja master Masaaki Hatsumi. Here's a video featuring a discussion with Hatsumi and a demonstration of some of his techniques:


Here's a bit of the Simpsons episode You Only Move Twice, directly parodying the film with the cheerfully villainous Frank Scorpio:

Thanks for listening!
Posted by Cinemaspection at 3:12 AM