While we try to cover as much as we can in our episodes, there's always more to see, hear, and read about a movie that can enhance your viewing experience. If you enjoyed our episode on The Terminator, here's a few extra bits you might find interesting... 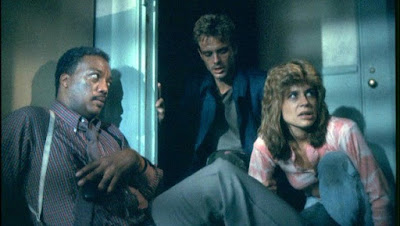 You can check out more of Kyle's work at Boston Hassle using the link below:

Here's the original trailer. Note that when Reese confronts the cop, we can hear the actor's original voice before he was looped:


We noted that Arnold Schwarzenegger wasn't the first choice for the role. Instead Cameron had envisioned his co-star Lance Henriksen as a more nondescript concept of the cyborg cyborg assassin. Here is some concept artwork Cameron created imagining Henriksen as the title character:

In this discussion, director James Cameron and star Arnold Schwarzenegger reflect on the making of the original Terminator:

Here are the deleted scenes we mentioned, which would have fleshed out additional character arcs for Sarah, Reese, and Lt. Traxler:


We discussed the many ways humanity has abused robots and artificial intelligence in our time. Corinne mentioned a chat robot that learned from its interactions with the public. That chatbot is known as Cleverbot and you can interact with it below. Please be kind; the future of humanity could be at stake:

Kyle also mentioned Hitchbot, the hitchhiking robot developed by that traversed Canada, Germany, and The Netherlands until it was cruelly beheaded in Philadelphia during its first trip across the U.S.. Here's the story of poor Hitchbot through a lecture by one of his creators, David Harris Smith. He shall be AVENGED!!!!

As with many action movies, the film received a video game tie-in on the Genesis console nearly a decade after the fact:

Here's the trailer for the latest installment in the franchise, Terminator: Dark Fate:

Thanks for listening!
Posted by Cinemaspection at 8:05 PM