On Her Majesty's Secret Service - Supplement

While we try to cover as much as we can in our episodes, there's always more to see, hear, and read about a movie that can enhance your viewing experience. If you enjoyed our episode on On Her Majesty's Secret Service, here's a few extra bits you might find interesting... 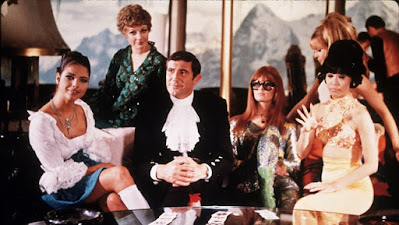 As we discussed, actor George Lazenby came to the attention of the producers following a series of television advertisements for Big Fry chocolate. Here's one of them:
We mentioned how one suspenseful scene, with Bond chasing a SPECTRE operative, was cut from the film. Here are some scenes from the partially filmed scene, giving viewers a sense of what the scene would have looked like:
The film features one of the most unique original Bond songs with the sentimental "We Have All the Time in the World," sung by Louis Armstrong. Here's that song:
In this video, David Zaritsky, creator of The Bond Experience video blog, tours the Piz Gloria location and its acknowledgments of its significance in 007 history:
And here's the trailer for Becoming Bond, the documentary chronicling George Lazenby's rise and fall as James Bond:
Thanks for listening!
Posted by Cinemaspection at 5:59 AM