Quatermass and the Pit - Supplement

While we try to cover as much as we can in our episodes, there's always more to see, hear, and read about a movie that can enhance your viewing experience. If you enjoyed our episode on Quatermass and the Pit, here's a few extra bits you might find interesting... 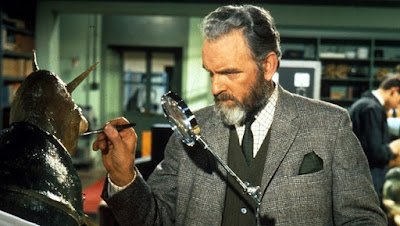 Here's the trailer for the American release, retitled Five Million Years to Earth:

The film is based on a successful BBC television serial. Happily most of the Quatermass television adventures are online for your enjoyment.

Here's the entirety of Quatermass II, featuring John Robinson as the Professor:

Here's the original television version of Quatermass and the Pit with Andre Morell as Quatermass:

The film follows two previous adventures for the Professor, played in the earlier films by American actor Brian Donlevy.

Here's the trailer for the Hammer film of The Quatermass Xperiment, retitled The Creeping Unknown for U.S. release:

We noted the music score of Tristam Cary and the existence of an alternate ending theme, suggesting perhaps that a more uplifting final scene was considered. Listen to this variant end title cue right here:

As Noel mentioned, actor Andrew Keir would reprise the role of Quatermass for the BBC radio drama The Quatermass Memoirs. You can listen to this mix of narrative and documentary here:

If you enjoyed hearing from our guest host Noel Thingvall, check out his various works on the net by visiting his website at The Noel Network.

Thanks for listening!
Posted by Cinemaspection at 4:26 AM