While we try to cover as much as we can in our episodes, there's always more to see, hear, and read about a movie that can enhance your viewing experience. If you enjoyed our episode on Thunderball, here's a few extra bits you might find interesting... 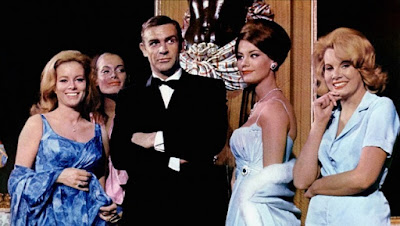 One of our favorite elements of this film is the character of Fiona Volpe, played by Luciana Paluzzi. In this featurette, Paluzzi discusses her experiences playing this classic femme fatale:

One of the most iconic scenes in the film is Bond's escape via jet pack, a device Bob still hopes will be commercially available soon. This video presents footage of various flights of the Go Fast jet pack.

Tom Jones famously sang the film's title track. Here's Jones singing it again at the British Academy of Film and Television Arts Awards in 2012 to celebrate the 50th anniversary of James Bond:

But as we mentioned, Jones' song wasn't the original theme for the film. Here' you can see how "Mr. Kiss Kiss Bang Bang," the original title song as sung by Dionne Warwick, would have appeared over the title credits:

And here's the trailer for the non-canonical remake of Thunderball, Never Say Never Again, which saw Connery return to the role after 12 years:

Thanks for listening!
Posted by Cinemaspection at 9:31 PM