From Russia With Love - Supplement

While we try to cover as much as we can in our episodes, there's always more to see, hear, and read about a movie that can enhance your viewing experience. If you enjoyed our episode on From Russia With Love, here's a few extra bits you might find interesting... 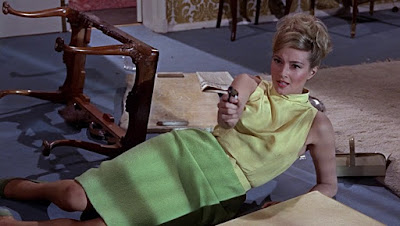 As we mentioned, the first meeting between Bond and Romanova became the go-to scene for auditioning potential Bonds. Here's a few clips of James Brolin and Sam Neill acting out that scene in their screen tests for Bond.

One thing we didn't mention is the urban legend that Bond author Ian Fleming makes a cameo in the film. Here's a short film investigating whether it is indeed Fleming himself:

As we noted, Sean Connery offered his voice talents to a video game adaptation of the film for PS2, XBOX and Gamecube. Here's a behind-the-scenes video on the making of the game with comments from Connery:

And here's the game's title sequence and first level:

Thanks for listening!
Posted by Cinemaspection at 6:38 PM