While we try to cover as much as we can in our episodes, there's always more to see, hear, and read about a movie that can enhance your viewing experience. If you enjoyed our episode on Suspiria, here's a few extra bits you might find interesting... 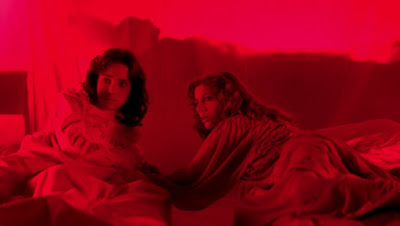 First here's the American trailer for the film, which caused confusion with a tagline thath led many to mistakenly believe the film's running time was longer than it was and that the U.S. version was severely cut:

If Suspiria whet your appetite for Argento's filmography, check out this documentary on the man and his work:

And this interview with Argento discussing his career:

As we discuss in the episode, lead actress Jessica Harper has focused on pursuits away from movie and TV screens, including writing children's books and offering cooking advice under the nickname the Crabby Cook. Here, Harper offers some tips for Halloween appropriately dressed as a WITCH!!!

Goblin, in a different line-up, continues to tour all over the world, including in America. Here's the group playing the Suspiria theme live:

As we also mentioned, that iconic theme has even been heard at sporting events, as Russian swimmers Natalia Ischenko and Svetlana Romashina have used it for some of their synchronized swimming routines. Here's the pair performing to the music at the 2012 Olympics in London:

Thanks for listening!
Posted by Cinemaspection at 3:58 PM