While we try to cover as much as we can in our episodes, there's always more to see, hear, and read about a movie that can enhance your viewing experience. If you enjoyed our episode on Carnival of Souls, here's a few extra bits you might find interesting... 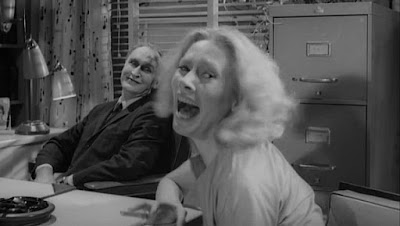 Here's the original trailer for the film, promising a new dimension in picture making!!

Here's an interview with the film's director Herk Harvey and screenwriter John Clifford:

Harvey was an experienced industrial filmmaker, creating short documentary and industrial films for Centron Films. One of their most famous was the sometimes gruesome workplace safety short, "Shake Hands With Danger:"

Here's a tour of the locations from Carnival of Souls as they appeared in the late 80s/early 90s:

Of course the film's most famous location is the Saltair pavilion in Utah. Despite numerous setbacks, a version of the venue still exists and hosts music events. Here's a link to the official site, which includes a detailed history of the pavilion:

Among the tragedies of Saltair was the arson of the second version of the pavilion in 1970, completely destroying the landmark as it appeared in the film. Here's some sad footage of that unfortunate conflageration:

Here's a segment from Entertainment Tonight covering the restoration of and re-release of Carnival of Souls, in which Leonard Maltin quickly spoils the twist of the movie.

The restoration included a proper premiere in Lawrence, Kansas and a Q&A with the cast and crew, with Harvey wearing his trademark ghoul make-up:

Here's a video introduction director Harvey made for the film on its re-release.

Lead actress Candace Hilligoss maintains a website where you can get autographed photos, watch Carnival of Souls, and get information on her upcoming memoir and events. Check it out here: 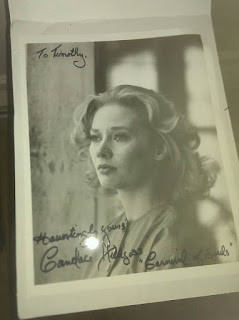 Thanks for listening!
Posted by Cinemaspection at 10:38 PM