While we try to cover as much as we can in our episodes, there's always more to see, hear, and read about a movie that can enhance your viewing experience. If you enjoyed our episode on The Beastmaster, here's a few extra bits you might find interesting... 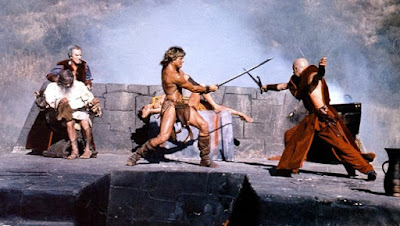 Central to the film is the acting presence of Marc Singer. Here's an interview with Singer reflecting on his career and his views on acting and performance:

Here's a radio interview with director Don Coscarelli talking about his career:

As we mentioned in the episode, there was a sequel that sees Dar traveling through time to our present (or at least the 1990s). Here's the trailer:

And for that matter, here's the movie itself:

Besides the film sequels, there was also a short-lived television spin-off, produced without Singer. Here's the first episode:

Thanks for listening!
Posted by Cinemaspection at 6:10 PM