While we try to cover as much as we can in our episodes, there's always more to see, hear, and read about a movie that can enhance your viewing experience. If you enjoyed our episode on 12 Angry Men, here's a few extra bits you might find interesting... 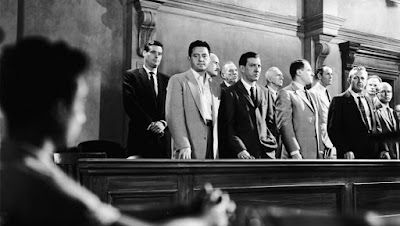 Here's the original trailer, sure to leave the smell of violent death in your nostrils!:

In 2008, the American Film Institute put out a series of lists charting the top ten films in different genres. 12 Angry Men placed second in their list of Courtroom Dramas, just under To Kill a Mockingbird.

From the TV special announcing the lists, here are director Sidney Lumet discussing the film and Rob Reiner commenting on its depiction of prejudice in the justice system (and breaking out in a decent Lee J. Cobb impersonation):


We mentioned Supreme Court Justice Sonia Sotomayor's affection for the film. Here's a New York Times article discussing her appearance at a screening of the film at the Fordham University School of Law: 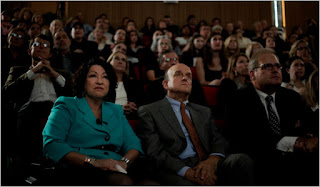 Here's the trailer for the 1997 TV remake, directed by William Friedkin. Check out that cast!:

We mentioned some of the various international remakes of the story during the episode. Here's the trailer for the Russian adaptation 12:

Amy Schumer's comedy show "Inside Amy Schumer" aired a spoof episode in which a jury argues over whether Schumer is sexy enough to be on TV. Here's a clip featuring John Hawkes and Paul Giamatti among others parodying the famous switchblade scene:

But here's the most amazing extra: the original television play version of 12 Angry Men, as it appeared live on the Westinghouse Studio One program on September 20, 1954, starring Robert Cummings and Franchot Tone in the lead roles:

Thanks for listening!
Posted by Cinemaspection at 12:31 PM