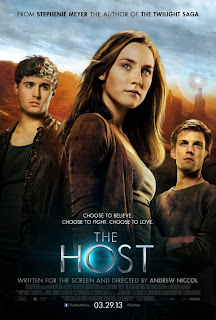 For so many people, Stephenie Meyer seems to be the devil. I’ve never been a fan of her work; in fact I think she’s a downright lousy writer, but I’ve never quite understood the extreme vilification that surrounds the media empire she’s built around her Twilight series or this conviction that she will single-handedly bring down Western culture. Plenty of my friends, all of them quite intelligent and rational people, enjoy her books and I’ve read and enjoyed plenty of books that others would no doubt sneer at in a similar manner. As such I find it hard to fault her fans or her for making a career off them.

Andrew Niccol on the other hand, I am an unabashed fan of. Niccol has already become a pretty respected figure in film, and particularly science fiction, mostly due to his directorial debut, the gorgeous futuristic thriller Gattaca. So with those caveats out of the way, we come to The Host. When I heard Niccol would be writing and directing the adaptation of Meyer’s alien invasion romance, it had the twisted appeal of an evenly matched prize fight. Could Niccol’s talents overcome the elements of Meyer’s storytelling that turn me off?

Most of Niccol’s films seem to center on individuals rebelling against the status quo, particularly the rigid, oppressive strictures of different societies. As The Host begins, a new global status quo has nearly been established, resulting in a happy, photogenic human race that has finally settled all its social, ecological and physical problems. The only drawback, besides spooky pale eyes, is that no one is actually human anymore. They are hosts for a race of luminous, parasitic aliens known as Souls that have almost completed their invasion of both Earth and its primary inhabitants. 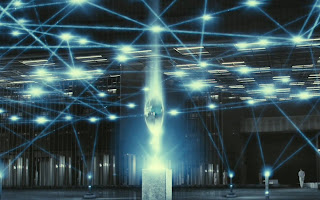 But the newest Soul to be implanted, self-christened as Wanderer due to its travels throughout the universe, meets resistance from the mind of its host body, a young woman named Melanie (Saorise Rowan) who had been ready to join an enclave of human survivors. A fellow Soul known as the Seeker (Diane Kruger) hopes that Wanderer can utilize Melanie’s memories to uncover the group’s location, but emotionally-charged memories of Melanie’s boyfriend Jared (Max Irons) and a promise to her younger brother Jamie (Chandler Canterbury), coupled with Melanie’s strong will, drive Wanderer to the humans’ desert hideaway to find them, with the Seeker in relentless pursuit.

Once there, Wanderer faces a human colony that doesn’t trust her. Her uncle Jeb (William Hurt), leader of the survivors, hesitates to kill her, curious as to what’s drawn her to them. Jared is conflicted, attracted to the body of the woman he loved while hating the intelligence controlling it, while Wanderer develops a tentative affection for human survivor Ian (Jake Abel), who seems intrigued by her/its alien nature.

Having never read the book, it’s tricky for me to judge just what to ascribe to Meyer and what to Niccol. The overall presentation suggests the finished film owes more to the vision of the former. Given Meyer’s success and the often aggressive fan reactions to changes when adapting a beloved book series, it makes sense that fidelity to the source material would be a primary edict. Like the divided central character, there seems to be a constant struggle for dominance between the romantic and science fiction elements as the story progresses, with the romance winning out. 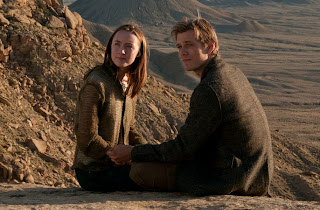 Whereas the Twilight series presented its readers with a romantic fantasy decked out in iconography of the horror genre, placing the classic archetypes of the vampire and werewolf in a standard romantic triangle, here Meyer appropriates the archetype of the body-stealing alien invader to shift up to a love quadrangle, with four personalities in three bodies attempting to sort out their respective feelings and desires.

There is definite promise in exploring the consequences of such a dilemma and how a foreign intelligence would process human emotions such as love or concepts such as sex or gender, but these possibilities are largely ignored while Meyer uses the situation to recast Twilight’s romantic conflict into a situation where her readers (and now viewers) don’t have to choose sides. With two different female personalities, there’s no need for a Team Jared or a Team Ian. Critics of Meyer who resented that Bella, the heroine of the Twilight novels, was defined primarily by her relationship with the male characters will find plenty of ammo for their views here since it’s implied that Melanie’s love for Jared is what allows her to resist the takeover. But the most egregious narrative offense is be saved for the finale, which features a particularly clumsy and dramatically sabotaging deus ex machine to sort out the romantic entanglements.


I found myself wanting to spend more time with the Souls. Their society, which seems to be built on kindness and generosity and where all of human society’s ills have been wiped away, along with its individuality, is intriguing. There are hints the parasites don’t understand the cruelty of their takeover, and regard humans with pity mixed with contempt, certain that left to its own devices, mankind would have inevitably wiped itself out. How they reconcile their peaceful demeanor with the psychically violent invasion of people’s minds is never really explained or developed. We are also never sure what the relationship between the Soul and host's mind would be under normal circumstances. While Wanderer can access Melanie's memories, if she inherited them in full, one might wonder if given time, she might in essence become Melanie to some degree herself, again an interesting idea left behind. As antagonists, the Souls get a few slightly menacing moments as they surround their victims with calm words and tranquilizing sprays, but what little impact they provide comes from echoes of their fictitious ancestors: Jack Finney’s body snatchers and Robert Heinlein's puppetmasters. 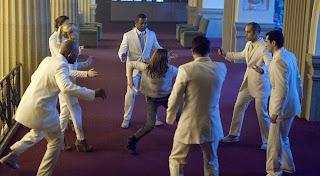 But even if the limitations to the story are from the source material, Niccol’s adaptation does little to correct them. All of the characters relationships as scripted are surface level only. We understand that Melanie and Jared’s love is so strong only because we told it is. Wanderer’s relationship with Ian has great potential to be much more interesting. How would personalities from such different origins and different mindsets find common ground? Like Roy Batty, Wanderer would no doubt have seen and known things human could barely conceive and would logically be a fascinating entity to know, and yet Niccol is content to have the pair smile awkwardly at each other and leave their attraction at that.

The opening montage and the general presentation of the Souls as clean, athletic, attractive people living in sterile environments that look like an Apple store and who show a predilection for shiny furniture, technology and vehicles initially suggests that Niccol may be approaching a fun visual idea by presenting the invading force with the glossy but flavorless imagery of a car commercial. Unfortunately, once we meet the humans, there’s no counterbalance. They mostly look like models too, just from a slightly grungier ad campaign. Invasion of the Body Snatchers as brought to you by J Crew.

I’d like to think that the need for faithfulness to the source material is part of the reason that Saoirse Ronan’s performance falls so flat. An Oscar nominee at the tender age of thirteen for her role in Joe Wright’s Atonement, there’s no denying that Ronan is supremely talented, yet she never convinces as a millennium-old entity that has seen the wonders of the galaxy. This is especially strange and frustrating since Ronan did a superb job depicting just the kind of inhuman curiosity this role would benefit from in Hanna two years ago. Instead, Wanderer comes across as merely a conflicted, confused, slightly naïve young woman, suggesting the exotic and much more interesting extra-terrestrial qualities of the character have been de-emphasized, perhaps to ensure she remains a relatable protagonist for Meyer’s core audience of teenagers. The decision neuters Wanderer’s whole arc of humanization.

As she engages in extended conversations and arguments with herself, we never feel that we are witnessing a conflict between two distinct personas. Perhaps it’s the lack of imagination in how it’s depicted. Melanie, sounding more annoyed than terrified, simply whines at Wanderer in slightly echoey voice-over. We never feel any sense of danger in her personality being subsumed by Wanderer. Instead of being suspenseful, it just feels embarrassing.

The rest of the cast doesn’t help. The romantic aspects of the story are also sabotaged by the fact that neither Irons nor Abel show any charisma as the men in Wanderer’s life. They are interchangeable to the point where for one key scene I actually lost track of which Wanderer was talking to. Diane Kruger pushes the neurosis a bit too far as the Seeker, making it dubious that none of her fellow Souls would think there’s something concerning about her demeanor. William Hurt looks as though he’s wandered out of a Larry McMurty mini-series and often seems to be on the verge of bursting out laughing. The only performance in the film that really feels in any way genuine is Chandler Canterbury as Melanie’s younger brother, providing the film with its most affecting moment as he asks Wanderer whether there really is anything of Melanie left within her. The combination of desperate hope and terrified discomfort in his voice is palpable.

Of course, I have to admit that some of my problems with the film may simply be a result of personal taste and expectations. The science fiction elements strike me as more interesting and are the things I like in Andre Niccol's work. But in the end, this is more Meyer's show and Meyer's specialty isn't social-based science fiction but romantic fantasy and is tailored for audiences seeking that respond to her depiction of it. Just as action movies can be forgiven bad acting if they provide the right level of excitement and horror films can be forgiven lapses in logic if they are sufficiently scary, those who just want scenes of attractive people in love may find that despite its myriad problems, The Host delivers what they're looking for. As for me, I always have three different film versions of Invasion of the Body Snatchers to keep me happy (I prefer not to count the Nicole Kidman one.)
Posted by Cinemaspection at 2:38 PM