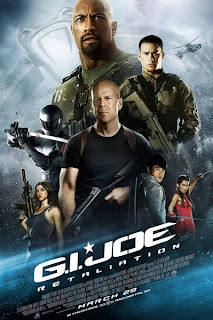 Those who grew up during the 1980s may have fond memories of the original G.I. Joe cartoon, which to our youthful eyes depicted a colorful universe of heroic American military men and women foiling the plans of dastardly villains with outlandishly hi-tech weapons and vehicles. The benefit of age and hard-earned consumer wisdom allows us to better recognize that the cartoon was an off-shoot of the venerable G.I. Joe toyline rather than the other way around and that every new character and every new vehicle was introduced in the hopes of making us all desperate to own their miniature counterparts waiting in the nearest toy store. We would pester out parents to buy us this or that, not only for bragging rights in the schoolyard, but for the promise of getting to play in that wide open universe we got a glimpse of every episode.

I'll admit there were moments during G.I. Joe: Retaliation when I got a tiny glimpse back into that more innocent mindset. Little has changed really. I have no doubt that a casual walk through the toy aisle at Wal-Mart or Target would reveal a lot of the combatants and gadgets that get blown up onscreen in this loud and ludicrous sequel are already waiting for a new generation of young customers to snap them up. I'm curious if the scenarios those kids will come up with in their own backyard wars will be as silly as what we're presented with here.
To bring those less familiar with the franchise up to speed, the previous movie depicted a battle between the G.I. Joes, reimagined as an international peacekeeping organization, and COBRA, a terrorist organization that's closer to SPECTRE than Al-Qaida given their plans for world domination. When the smoke had cleared, the Joes had successfully imprisoned Cobra's leaders, the imaginatively named Cobra Commander, and hard-headed arms dealer Destro.
What they didn't realize is that Cobra's master-of-disguise Zartan (Arnold Vosloo) had taken the place of the U.S. President (Jonathan Pryce) and is busily using his pilfered political influence to get his superiors out of prison and to launch an attack that will decimate and discredit the Joes, who apparently have changed back into being a U.S. military force again. After an explosive massacre in the desert, the only surviving team members are Roadblock (Dwayne Johnson), Flint (D.J. Cotrona), Lady Jaye (Adrianne Palicki) and taciturn ninja Snake-Eyes (Ray Park). You'll pardon me if I don't describe their specialties or roles in the field. I'm not convinced even the film knows these details. Anyway, framed as traitors themselves and cut off from any aid, the foursome conspire to reveal Cobra's deception and halt the latest plot to, of course, conquer the world.
The movie makes for an interesting comparison with Olympus Has Fallen given that both are noisy action films about American heroes facing a ludicrously implausible situation. The distinction here is that while G.I. Joe is just as clunky as Olympus, it's also fully aware of how silly it all is and is comfortable playing at that level, resulting in something harmlessly diverting as opposed to Olympus' grim and unpleasant political bent. With the James Bond series playing things a bit more grounded these days, it almost seems as though this franchise is looking to fill 007's older, less trendy shoes, embracing a level of goofiness that brings to mind the rough Roger Moore or the late Brosnan eras of that series and featuring the same type of implausible technological MacGuffin and colorful henchmen. Most of the characters from the first film don't return or have minimal involvement in the story but the script somehow manages to turn these abandoned characters and dangling plotlines into wider world building. Just as with the cartoon series, we get a strong sense they are lingering in the periphery waiting to be featured in a future installment.
Unfortunately the script has some other problems that can't be waived away as easily. There are the logical nitpicks, such as how the bogus president can condemn the Joes and publically endorse Cobra without raising any red flags for the intelligence community. There are also some intriguing character possibilities that get shoved to the side due to the need to include so many characters and beats. One potentially interesting sub-plot involves the long-running feud between Snake Eyes and his fellow ninja nemesis Storm Shadow and the decision by Storm Shadow's sister Jinx to assist Snake Eyes in trying to capture him. There's so much potential to investigate that character's choices and motivations but instead she's reduced to another spandex clad action figure leaping around with a sword.

That brings up the more troubling issue of Lady Jaye in the film. As the main female character in the film, it's really distressing to see that once the heroes are in the field, her main role becomes to dress in scanty outfits to ensnare male characters. To compound the problem, her big character-building monologue about her desire to be taken seriously as a female soldier is delivered while she's stripping to her lingerie. While I wish I could believe the film is having a self-aware dig at the objectification of women in action movies, I really don't think that's the case. And the icing on the cake? Once she's finished her speech, how is her heartfelt speech about acceptance responded to? She's told she looks nice.

So enough of all this story nonsense, right? You're wondering about the action. Well, most of it seems more interesting in conception than it plays out in execution. The big set-piece that's been prominently displayed in the trailers is Snake Eyes and Jinx's treacherous mountainside battle with a team of enemy ninjas and while it no doubt looks great in 3-D (I saw the regular 2-D version), it makes no sense in terms of clarity or physics. Most of the rest of the combat and fight scenes are filmed in slightly jerky, slightly shaky style which is mostly intelligible but nothing ground-breaking. Perhaps it's a holdover from the cartoon where no one ever actually sustained gruesome injuries, but I found myself surprised at the high death toll depicted, albeit bloodlessly. I will also confess to succumbing to some childish nostalgia when it comes to the gadgetry, including a gun-laden motorcycle that turns into a set of missiles, tiny explosive fireflies and large tank demolishing assault vehicles. Remember parents, the batteries aren't included and some assembly may be required.

I'll admit I want to be more charitable toward the movie partially due to the performances of a few of the main actors. First of all, there's Dwayne Johnson, who originally seemed poised to take over the action hero mantle of Schwarzenegger and Stallone in the early 2000s. He never quite got there but has the screen presence, both in terms of physique and charisma, to pull it off and his willingness to not take himself very seriously gives him an distinct appeal. While he never quite anchors this often wayward film, he gives us someone we can cheer for.
Returning as Duke Hauser from the first film, Channing Tatum has a greatly reduced role and I'm a bit surprised to find myself disappointed. There were rumors the film's release date was moved back partially due to Tatum's increased bankability following 21 Jump Street and Magic Mike and the resulting desire to add some more scenes for him. That's since been denied but if they did give Tatum some extra screen time, it seems they took the right lesson from Jump Street by emphasizing Tatum's unexpected flair for comedy. We're given several nice little moments where he gleefully undercuts Duke's military machismo with a very humanizing awkwardness. The great rapport he has with Johnson makes us wish could have seen more of these guys playing off each other.

On the villainous side we have Jonathan Pryce, who finally gets to play the James Bond villain he should have been allowed to in Tomorrow Never Dies. With Cobra Commander, the franchise's epitome of evil, reduced to strutting around in a cool costume (which will no doubt be everywhere this Halloween) and Destro out of play it falls to Pryce to take the central villain role as Zartan in his presidential disguise and he has a high time of it, exuberantly enjoying his character's consequence-free rampage through another man's life. Ray Stevenson also provides some good burly menace as Cobra demolitionist Firefly and Walton Goggins has a fun bit part as a jolly prison warden.

Alas, not everyone passes muster. Skilled martial artist Ray Park's comically exaggerated mannerisms in his mute part as Snake Eyes come across more like a scaled-down Ultraman than a badass ninja. He did a better job expressing himself through movement in Sleepy Hollow and he didn't even have a head in that movie. Both Cotrona and Palicki are as bland and forgettable as their characters, the RZA gives a positively embarrassing performance as Snake Eye's sensei and a glum Bruce Willis shows up to glower, fire a few guns and collect a check.

Although it's as noted, probably a bit too violent for them, I find myself curious as to how this movie would play to the younger crowd. Would it still fire up the imagination in terms of the expansive world the toys and cartoons once promised, or has that effect been lost? Adults may, as I did, catch a few glimmers of that old sandbox mentality but will probably find this G.I. Joe breaks into pieces a lot faster than the toys did.

Well, I was always more of a Masters of the Universe kid anyway.
Posted by Cinemaspection at 10:48 AM