While we try to cover as much as we can in our episodes, there's always more to see, hear, and read about a movie that can enhance your viewing experience. If you enjoyed our episode on Bringing Up Baby, here's a few extra bits you might find interesting... 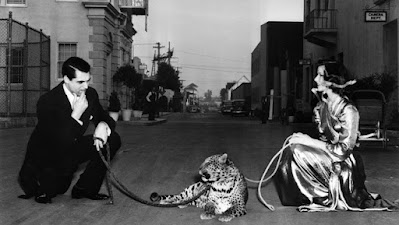 Here's the original trailer for the movie, featuring some shots and additional coverage not used in the final film:
In this Turner Classic Movies segment from 2015, Ben Mankiewicz introduces the film:
In this clip from the AFI Movie Club, Howard Hawks discusses his views on comedy and the making of Bringing Up Baby:
As we mentioned, the museum scenes contain props that appear in other famous monster movies.
Here you can see the stop-motion Brontosaur model from the famous attack scene in the original King Kong: 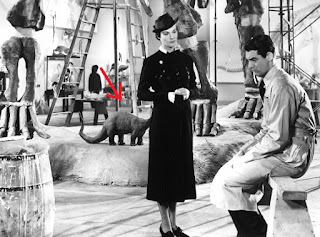 In this shot, on either side of the screen you can see the Stegosaur model from King Kong and the Styracosaur from Son of Kong: In this shot from the Warner Brothers creature feature The Beast From 20,000 Fathoms, we see the Brontosaur skeleton prop from the movie being reused: 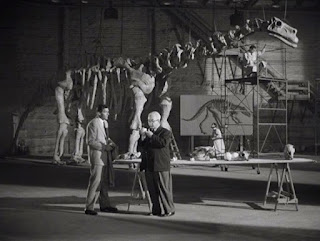 In this segment from the BBC documentary The RKO Story, optical effects veteran Linwood Dunn discusses the various methods used to put Cary Grant and Katharine Hepburn in the same frame with Nyssa, the leopard who portrayed Baby in the film:
Thanks for listening!
Posted by Cinemaspection at 3:32 PM