The Trouble With Harry - Supplement

While we try to cover as much as we can in our episodes, there's always more to see, hear, and read about a movie that can enhance your viewing experience. If you enjoyed our episode on The Trouble With Harry, here's a few extra bits you might find interesting... 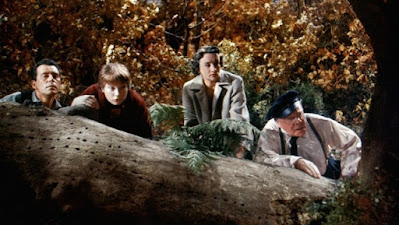 Here's the hilarious original trailer which toys with the audience beautifully before revealing what film it's really advertising:

Here's an interview with Jerry Mathers discussing his childhood experiences working with Hitchcock on the film:

As Noel mentioned, actress Mildred Natwick went on to do a series of television mystery movies with Helen Hayes. Here's the first film Do Not Fold, Spindle, or Mutilate:

And here's one of the follow-up productions she made, an installment of The Snoop Sisters:

This was legendary composer Bernard Herrmann's first collaboration with Hitchcock. This medley of themes from the film, A Portrait of Hitch, was put together by Herrmann as a tribute to the director

Here's the novelty song inspired by the movie by Ross Bagdasarian

This film was one of five movies Hitchcock regained the rights to and pulled from distribution, leaving the rights to his daughter Patricia, becoming known as the 'Lost Hitchcocks.' Here's a 1983 trailer advertising their re-release:

Click the link below to watch Looking for Trouble With Harry, a short film follows two fans of the film searching for the shooting locations in Vermont:

LOOKING FOR TROUBLE WITH HARRY from Paulfilms by Paul Menzies on Vimeo.

Posted by Cinemaspection at 7:47 PM