While we try to cover as much as we can in our episodes, there's always more to see, hear, and read about a movie that can enhance your viewing experience. If you enjoyed our episode on Scrooged, here's a few extra bits you might find interesting... Lead actor Bill Murray is always unpredictable and here you see him try to keep himself entertained during a press junket interview with Bobbie Wygant to promote the film:

Here during the same junket, Wygant interviews director Richard Donner about the scale of the film, the difficulties of adapting A Christmas Carol into a comedy, and balancing the ghoulish aspects of the film with laughs:

We mentioned some of the scenes that may have been cut or reshot for the film. Here's a rare still of Murray and David Johansen in a scene that doesn't appear in the final cut, possibly the original scripted version of Frank first meeting with Claire at an ice rink in Central Park: 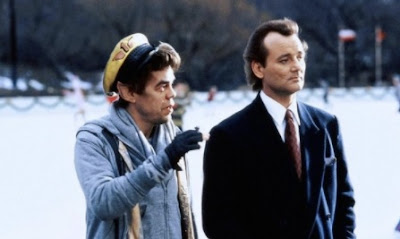 During the holiday season of 1988, you couldn't help but hear Annie Lennox and Al Green's cover of Jackie DeShannon's Put a Little Love in Your Heart all over the radio. Here's the music video, featuring clips from the film:

While the film was a box office success, reviews were mixed. Here's a segment of Siskel & Ebert where Ebert reveals his distaste for the film and his perception, correct as it turns out, that Murray was not happy making the film:

If you're looking for a last-minute Christmas gift or just a great read about the make-up effects industry, check out Heather Wixson's marvelous book Monsters, Make-up & Effects: Conversations With Cinema's Greatest Artists, which we discussed in detail in a previous episode and which offered us some great anecdotes about the making of Scrooged. The book is available through AM Ink at the link below: 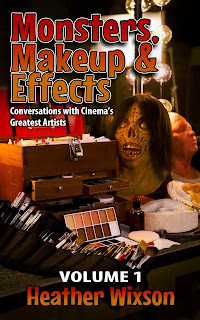 Posted by Cinemaspection at 3:49 PM