While we try to cover as much as we can in our episodes, there's always more to see, hear, and read about a movie that can enhance your viewing experience. If you enjoyed our episode on Terminator 2: Judgment Day, here's a few extra bits you might find interesting... 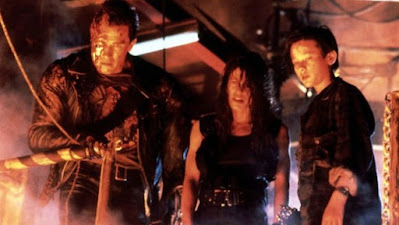 You can check out more of Kyle's work at Boston Hassle using the link below:

We noted that rocker Billy Idol was one of the first candidates to take on the role of the evil T-1000 Terminator. Here's some early production art created with him in mind: 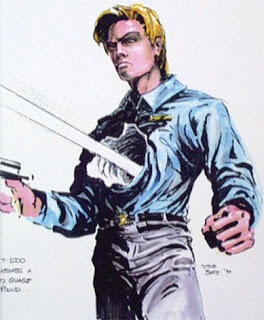 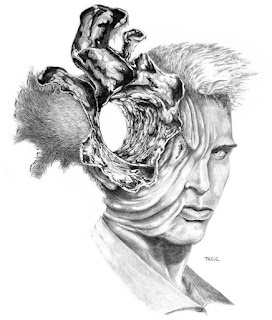 Actress Linda Hamilton's performance as tough survivor Sarah Connor definitely changed her image after the film's release. In this monologue from Saturday Night Live, Hamilton spoofs her image as a gun-toting action heroine:
This intriguing deleted scene shows the T-1000's unique way of searching John Connor's room:
Director James Cameron wisely chose to cut this extra epilogue at the end of the movie, leaving the film's resolution slightly ambiguous:
The film won several of the technical awards at the Oscars that year, including best visual effects and make-up:
There were several video game tie-ins for the film. Here's a playthrough of the original first-person-shooter arcade game:
And here's the Genesis version:
The Universal Studios ride T2 3D: Battle Across Time reunited director James Cameron and stars Arnold Schwarzenegger, Linda Hamilton, Edward Furlong, and Robert Patrick to take viewers into the future war. Watch the ride in its entirety:
Thanks for listening!
Posted by Cinemaspection at 5:27 PM