While we try to cover as much as we can in our episodes, there's always more to see, hear, and read about a movie that can enhance your viewing experience. If you enjoyed our episode on Point Break, here's a few extra bits you might find interesting... 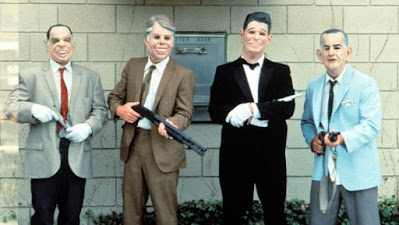 Here's the trailer:
Here's a behind-the-scenes featurette that focuses on Kathryn Bigelow's shooting style and how some of the stunts and action scenes were accomplished:
Here's an interview with Keanu Reeves discussing the film and the character of Johnny Utah:
Here's Reeves winning his Most Desriable Male award for Point Break at the MTV Movie Awards:
Here's a promo video for the Point Break Live stage experience:
And here's a trailer for the 2015 remake. If you look close, you can see a shot of James LeGros, who played Roach in the original film, in his cameo as an FBI director:
Thanks for listening!
Posted by Cinemaspection at 5:51 AM