While we try to cover as much as we can in our episodes, there's always more to see, hear, and read about a movie that can enhance your viewing experience. If you enjoyed our episode on the The Day the Earth Stood Still, here's a few extra bits you might find interesting... 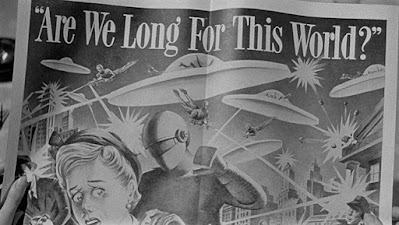 The film is loosely based on Harry Bates' short story 'Farewell to the Master,' first published in 1940 in Amazing Tales magazine. If you're interested in reading the original, it's available on Internet Archive:
One of the film's most enduring elements is its amazing score by master composer Bernard Herrmann, created to highlight the strange, electronic instrument known as the Theremin. Here Ed Sussman discusses the Theremin and demonstrates how this instrument works by playing the theme from the film:
Gort unmasked! Here's a rare publicity still of actor Lock Martin out of his robot costume: 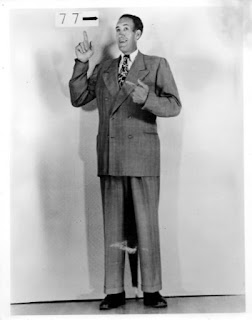 Agatha mentioned the moment when Helen attempts to help the mortally wounded Klaatu as a reference to the pietà theme. Here's a comparison between one of the moment in the film and one of Michelangelo's models of this motif:

Child actor Billy Gray, who plays Bobby, has had a long career including his best known role as Bud on Father Knows Best. He also appears in one of the all-time great film spoofs, Ernie 'Ford' Fosselius' Porklips Now:
Here's the Lux Radio Theater adaptation of The Day the Earth Stood Still, featuring Michael Rennie and recreating his screen role and Jean Peters filling in for Patricia Neal:
This segment from the History Channel discusses the incident we mentioned in which UFOs were tracked and sighted over Washington on two weekends in July of 1952:
Here's the trailer for the 2008 remake of The Day the Earth Stood Still, featuring Keanu Reeves as Klaatu alongside Jennifer Connelly, Kathy Bates, Jaden Smith, and John Cleese, directed by Scott Derrickson:
Posted by Cinemaspection at 8:51 PM