While we try to cover as much as we can in our episodes, there's always more to see, hear, and read about a movie that can enhance your viewing experience. If you enjoyed our episode on Pitch Black, here's a few extra bits you might find interesting... 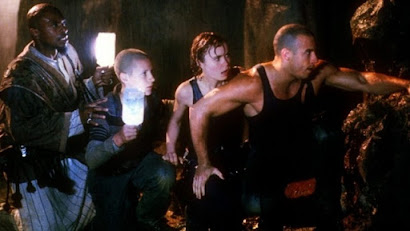 To promote the movie, the Syfy Channel (back when it was the Sci-Fi Channel!) aired "Into Pitch Black" as a companion piece to the movie:

Universal produced several pieces of media to capitalize on interest in the Riddick character as the sequel was in production.
One was a video game for the XBOX that served as a prequel to Pitch Black, The Chronicles of Riddick: Escape from Butcher Bay:
Universal also produced an animated short that would bridge the gap between the two films, directed by Peter Chung of Aeon Flux fame. Here's a clip:
The success of Pitch Black led Vin Diesel and directed David Twohy to create a sequel on a more epic scale, The Chronicles of Riddick, in 2004. Check out the trailer:
After nine years, Diesel and Twohy reunited for a third film, Riddick, which brought the character back to his down and dirty roots:
Thanks for listening!
Posted by Cinemaspection at 5:14 AM