While we try to cover as much as we can in our episodes, there's always more to see, hear, and read about a movie that can enhance your viewing experience. If you enjoyed our episode on Nineteen Eighty-Four, here's a few extra bits you might find interesting... 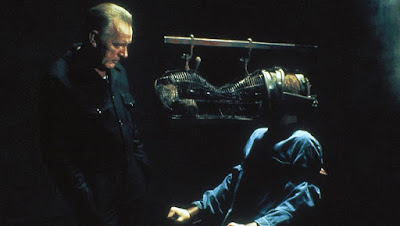 That trailer prominently featured the single "Sex Crime" by Eurythmics, one of the several songs the duo recorded for the film's soundtrack. Here's the video for that song:

And here's one for the theme they created for Julia:

Here's a short featurette on the making of the film:

The film has inspired many homages and parodies. Here's a fun short film that pokes gentle fun at Big Brother, Me and the Big Guy:

Here's the legendary 1984 ad for Apple, directed by Ridley Scott, that takes directed inspiration from the film:

If you're interested in a different take on the novel, check out this excellent adaptation from the BBC featuring the great Peter Cushing as Winston Smith:

And here are some final words from a BBC interview with author George Orwell:

Thanks for listening!
Posted by Cinemaspection at 8:46 PM