While we try to cover as much as we can in our episodes, there's always more to see, hear, and read about a movie that can enhance your viewing experience. If you enjoyed our episode on Goldfinger, here's a few extra bits you might find interesting... 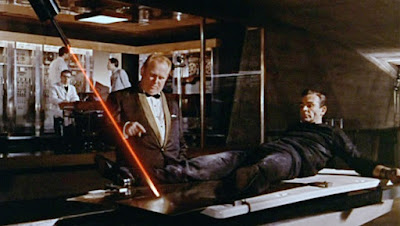 By the time Goldfinger was released, James Bond fever has swept the world, as seen in this AP footage of the Goldfinger premiere in London:

Here's Dame Shirley Bassey proving she's still got it as she sings the classic title song at the 2011 Classic Brit Awards as a tribute to John Barry:

As we mentioned, Honor Blackman, playing Pussy Galore in this film, previously played British agent Cathy Gale on the cult spy show The Avengers. In the episode "Too Many Christmas Trees," (which also came up in our episode on A Christmas Carol),  John Steed gets a post card from his former partner that contains a sly reference to the events of Goldfinger. Perhaps Cathy actually went undercover?:

We mentioned how actor Harold Sakata, who played Oddjob, reprised the character in a series of Vicks cough medicine ads. Check one of them out here:

The television program Mythbusters set out to dispel the concept presented in the film that one could die from skin suffocation due to gold paint. Here, Adam Savage puts the Jill Masterson myth to the test:

Speaking of Jill Masterson, contrary to the rumors that she actually died filming that scene, she's alive and well and decided to recreate the iconic image she created by being painted gold again 50 years later for a photo shoot in the Daily Mail. At 78, Miss Eaton is still looking good: 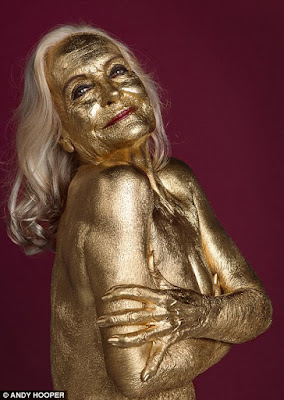 And while Ken Adam let his imagination run wild with his interpretation of the interior of Fort Knox, the reality is a bit less glamorous but still interesting. Here's a segment from Kentucky Educational Television on America's most secure vault:

Thanks for listening!
Posted by Cinemaspection at 8:29 PM