While we try to cover as much as we can in our episodes, there's always more to see, hear, and read about a movie that can enhance your viewing experience. If you enjoyed our episode on King Kong, here's a few extra bits you might find interesting... 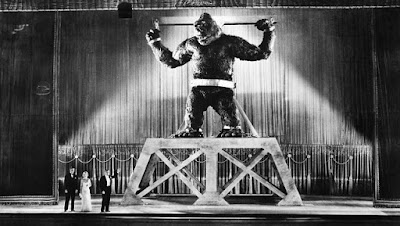 Ok, appropriately enough for this movie, this is going to be a big one...

While the original trailer for King Kong from 1933 is lost, here's a 1938 re-release trailer:

For her whole career, actress Fay Wray has been linked to her gigantic co-star. Here's a TCM promo in which Wray reads from the forward to her autobiography, written as a letter to Kong himself:

Directors Merian C. Cooper and Ernest B. Schoedsack led lives just as adventurous as the characters in the film. He's an audio recording of Schoedsack discussing his career and his work with Cooper, with some details on Kong:

The film was a huge influence on many filmmakers, notably stop-motion animator wizard Ray Harryhausen. Here is a discussion from a British Film Institute screening in which Harryhausen discusses his relationship with the film:

The film's finale has been a source for many spoofs in film, on television, and notably in commercials: Here are a few TV ads featuring the Eighth Wonder pitching products:

To celebrate the 50th aniversary of the film, a full-size balloon of King Kong was mounted to the side of the Empire State Building. The event didn't work out as planned, and Kong's stay on the building turned out to be almost as short-lived and fatal as it was in the film. Here are some photos of the balloon's brief visit:

Kong is also historic in that its laserdisc release from the Criterion Collection (their second release after Citizen Kane) had the first ever audio commentary for a film, delivered by film historian Ronald Haver. While due to rights issues, that commentary is mostly lost to history, here's the first few minutes of it. Haver's commentary begins around the two-minute mark:

As we mentioned, while making his 2005 remake of King Kong, director Peter Jackson and his effects team at WETA took it upon themselves to film their own re-creation of what the lost "spider pit" scene cut from the final print of the original King Kong might have looked like. While we can hope the real footage someday surfaces, take a look at what they came up with:

Thanks for listening!
Posted by Cinemaspection at 12:30 PM