While we try to cover as much as we can in our episodes, there's always more to see, hear, and read about a movie that can enhance your viewing experience. If you enjoyed our episode on Batman, here's a few extra bits you might find interesting... 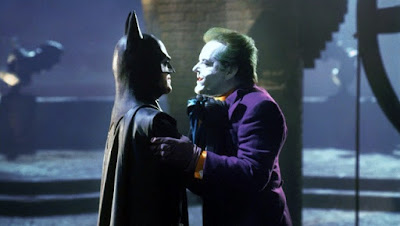 Here's the first look anyone got at the film, a rare teaser which did a lot to calm fan fears about the tone of the film:

Here's the rather avant-garde original trailer:


Of course, the casting of Keaton caused a huge stir among die-hard Batman fans who didn't feel he fit the image of the Caped Crusader as presented in the comics. In this interview clip, Keaton and director Tim Burton discuss the controvery:

As we mentioned during the episode, a chase scene was cut from the script that would have introduced Robin for future installments. Here's a storyboard re-creation of what that might have looked like courtesy of the Batman blu-ray release:

One of the more notorious bits of marketing was this video for Prince's Batdance song, which appears on the soundtrack but thankfully not in the film itself:
Of course accompanying the film's release was a deluge of merchandising. Here are a few pages from a 1989 Warner Brothers brochure advertising some of the items available:

Courtesy of the Trading Card Database, here's a complete checklist with images of the Batman trading cards from Topps mentioned during the episode: 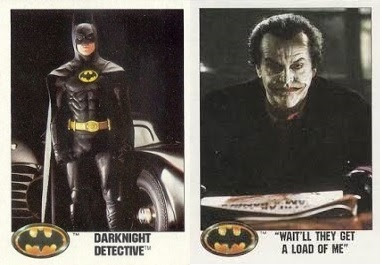 While he never made a return appearance in the Batman films, Robert Wuhl did reprise his role as Alexander Knox in ads for a "Steal the Batmobile" contest for MTV:

And once the film hit video, the ad blitz continued as seen here in some of the promos on the original VHS release, including a return appearance by Michael Gough as Alfred and a bit with the Looney Tunes:

And finally, here it is... the moment we all waited for... the epic meeting of the real Batman and Superman:

Thanks for listening!
Posted by Cinemaspection at 9:53 PM