This in-joke comes from the imaginative cinematic universe of Guillermo del Toro and suggests that the Bureau for Paranormal Research and Defense from Hellboy has been busier than we thought. 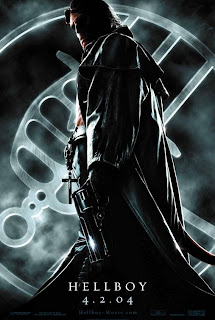 The scene in question comes as rookie BRPD agent John Myers (Rupert Evans) is getting a tour of the agency's main facility and is led past many of the supernatural objects they've collected over the years. I'd imagine scenes like this are a set decorator's dream, allowing for lots of fun gags via the various props on display.

In particular there's this one... 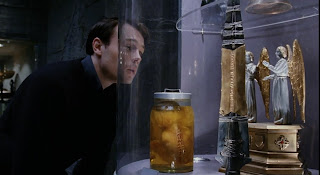 That cute kid in the jar looks familiar... ...perhaps gathered during a BRPD jaunt to a haunted orphanage in Spain? Fans of del Toro's filmography will recognize that specimen as coming from his superb ghost story The Devil's Backbone, where it was one of that film's iconic images. Perhaps Hellboy and the gang visited Spain and finally put that swirling ghost to rest? With a director like del Toro, who possess a great eye for insane detail, it wouldn't surprise me if there are tons of little touches like that throughout his movies, waiting to be found.

﻿
Posted by Cinemaspection at 7:32 PM