This time out, a teen detective allows a potential murder suspect to pass right on by in Rian Johnson's brilliant high school noir Brick. 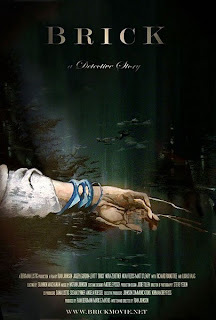 The scene in question occurs early in the film as the movie's dour protagonist, Brendan (Joseph Gordon-Levitt), goes to a 'Halloween in January' party looking for information related to his ex-girlfriend's murder. As he enters the party, among the many costumed attendees is a young woman lugging a cooler behind her... 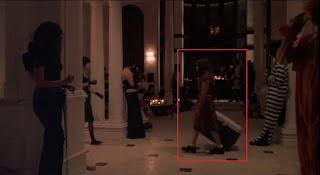 Though it's not related to the web of crime, deceit and murder he's investigating, Brendan would probably have been interested in that cooler's contents, because the woman in question is intended to be the title character from Lucky McKee's May... 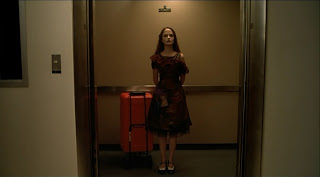 In that film, the amazing Angela Bettis plays a disturbed young woman with a unique and rather bloody conception of how to make friends. It makes sense that Johnson might want to include her in his debut film since he got his big break serving as one of the editors on McKee's movie and would cast another actress from it, Nora Zehetner, as Brick's female lead.
Posted by Cinemaspection at 8:44 PM

Email ThisBlogThis!Share to TwitterShare to FacebookShare to Pinterest
Labels: Brick, in-jokes, May