This time we get a revealing example of the care and detail that goes into the making of props from the opening scenes of John Carpenter's The Fog. 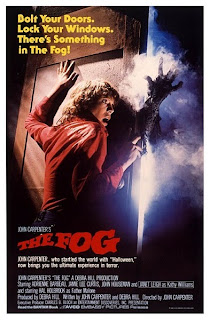 The moment in question comes when Father Malone (Hal Holbrook) has his night of solitary drinking interrupted by a loose piece of masonry, revealing an ancient leather-bound journal hidden within the walls of his church for a century.

Malone takes a cursory look at the journal, which will later detail the sordid history of the film's locale, Antonio Bay, and provide the backstory for the fog-shrouded zombie attack to follow. But click on the photo and take a closer look at the page Malone pauses on for a moment:

It's hard to make out everything, but the cursive script reveals two discernible phrases. Do they hint at the terror that will befall Antonio Bay and its residents? Do they make clear how the rotting dead can be appeased and made to halt their rampage? Or do they reveal the frustration of a member of the art department.

Among other bits not completely visible, we can make out:

...my college education to work writing dumb shit in this fucking movies props...

...It's time to bring in the nude girls with big tits, tattoos and shaved beavers...

Clearly it's a find of major archaeological significance.
Posted by Cinemaspection at 6:57 PM