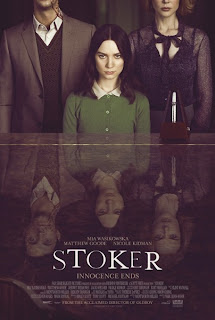 Fans of Korean director Park Chan-Wook, among whom I count myself, will know that he likes to focus on some grim themes, notably revenge, lust and other savage impulses that lie tucked away beneath one's civilized façade. For his English-language debut, Park is pleasantly on form with this Gothic suspense-drama that stylishly depicts how in some circumstances, no amount of family counseling can ever be enough.
The home dynamics of the family in question, consisting of the introverted India Stoker (Mia Wasilkowska), her emotionally distant mother Evelyn (Nicole Kidman), and loving father Richard (Dermot Mulroney), already seem a bit abnormal when Richard is killed in a car accident on India’s eighteenth birthday. One unexpected mourner at the funeral is Charlie (Matthew Goode), Richard’s heretofore unknown brother who seems eager to have an extended visit and grow close to his family, perhaps closer than is healthy. As a flirty attraction growing between Evelyn and Richard, India becomes unnerved by Richard’s attention and the conflicting emotions it stirs. Meanwhile the disappearance of the family’s maid and foreboding hints from a nervous aunt (Jackie Weaver) suggest a deep, dark family secret is about to come to light.
The basic plot outline would suggest an interbreeding of Hitchcock’s Shadow of a Doubt with a feminine take on Hamlet, but the screenplay, by Prison Break star Wentworth Miller, takes a gradual curve into something much more disturbing and interesting by upturning audience expectations regarding the characters and how we feel about them, or think we should. He also shows confidence in the audience by allowing them to piece together or interpret some story elements without too much comment or explanation. However, this ambiguity can be a bit problematic in terms of plot logistics and character motivations. As the film progresses, India begins making some decisions that don't always seem logical, or at least what normal people would consider logical. I also found myself pondering some murky plot points after the credits (which appropriately enough scroll in the wrong direction) wrapped, such as just who gives India an important object that becomes key in solving the mystery of her uncle, and why it was given to her.
Park’s visual style puts us squarely into India’s somewhat unstable mind and insular environment, as the handsome cinematography ably captures both the beauty and decay of the country setting in rich, dark colors. Tight close-ups visualize India’s skill at observing tiny details while the use of sweeping camera moves imbue even quiet dinner scenes with a sinister energy that delineates the battle lines between everyone seated at the table. When the violence comes, as it must given Park’s preferred subject matter, it’s alternately presented in disturbingly erotic slow-motion close-ups or in clinically-detached wide shots that somehow enhance the horror of the moment while cutting back on grisy detail.

The fractured editing neatly conveys how India processes events, with actions as mundane as opening a piano’s fall board triggering flashes of horror. There’s also a dynamic use of sound for both storytelling purposes, such as during a party scene where the whispers of bystanders gives us some key insights into India and Evelyn’s relationship, and for purely visceral ends, such as the disgustingly satisfying squish a blood-soaked pencil makes in a sharpener.
Wasikowska has been proving herself to be as talented as she is beautiful and anchors the film as our Goth girl heroine. Introverted, antisocial and isolated, India spends much of the film observing others, her hunter’s eyes peering out at the strange world around her from beneath long dark tresses that frame her face like an iron helm. But where it would be easy to substitute attitude for character in this kind of role, Wasikowska makes us feel the turmoil and confusion beneath India’s stoic façade as she struggles with her burgeoning sexuality, a turbulent period in any young person’s life, much less someone facing it without motherly support and in the creepy context India faces. The dynamic of Wasikowska’s previous roles in films like Alice in Wonderland and The Kids Are Alright, in which young women pass through strange events to emerge independent and better able to face life, is deliciously corrupted here.
Goode has a tricky line to walk as Uncle Charlie, required to present an outward plastic charm but with an undercurrent of menace that may or may not be a result of India’s skewed perception. It’s to Goode’s credit that when the mask is briefly lifted and we finally get a sense of his motivations and what his place in the family is, it feels consistent and is surprisingly affecting.
With Kidman as Evelyn, I admit initially I felt there was something lacking, less from performance and more because on a script level it seemed as some aspect of the character wasn’t fully explored or defined. On reflection however, when one considers how much of the story we see from India’s perspective, that may be the point. Like India, we feel it difficult to relate to this seemingly shallow woman who displays little grief over her husband’s passing. But as the story plays out, we begin to sense that her facile socialite cheer conceals the deep loneliness, discomfort, and resentment of a woman trapped in a chilled marriage.

There's a good chance Stoker is the type of film that divides audiences, as it could easily turn off people due to its midpoint surprises and its willingness to complicate audience identification with its heroine. But those with a taste for the demented and macabre, among whom I count myself, shouldn't hesitate to follow into the dark places it leads. Definitely recommended.
Posted by Cinemaspection at 5:05 PM