Strangers on a Train - Supplement

While we try to cover as much as we can in our episodes, there's always more to see, hear, and read about a movie that can enhance your viewing experience. If you enjoyed our episode on Strangers on a Train, here's a few extra bits you might find interesting.. 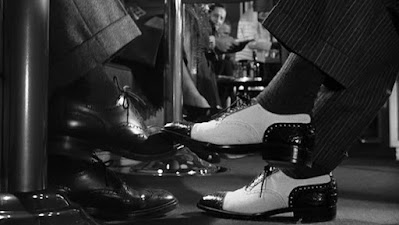 Here's the original trailer for the film. Note the shot of the murder scene visible playing at normal speed:

Here's an introduction to the film from film noir expert Eddie Muller that aired on Turner Classic Movies as part of their Noir Alley series:

The film is based on the novel by Patricia Highsmith. If you're interested in checking out the very different source material, listen to an audiobook of the novel here:

The film featured the largest role for director Alfred Hitchcock's daughter Patricia. Here, she recount her memories of the film and working with her father:

One of the film's lasting contributions to popular culture was to inspire Danny DeVito's comic retelling Throw Momma from the Train:

And check out this spoof of the film (and Hitchcock's filmography in general) from the Tree house of Horror XX episode of The Simpson's:

Posted by Cinemaspection at 5:15 AM