While we try to cover as much as we can in our episodes, there's always more to see, hear, and read about a movie that can enhance your viewing experience. If you enjoyed our episode on This Island Earth, here's a few extra bits you might find interesting... 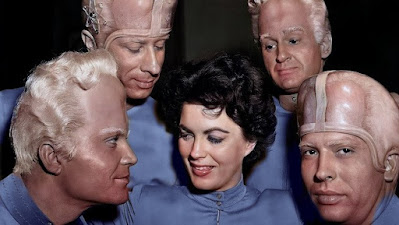 If you're interested in checking out the original short story trilogy as published in Thrilling Wonder Stories magazine, all three stories are currently available on the Internet Archive:

Noel mentioned star Jeff Morrow's performance in the sci-fi film The Giant Claw, leading a debate about the effectiveness of the creature appearing in it. If you haven't seen the movie, check it out below and make your own decision about this feathered menace:
We also discussed the amazing career of feline thespian Orangey the Cat. Here's a video detailing Orangey's amazing filmography:
We mentioned how some of the crates in the film appeared in the Universal-International feature Imitation of Life. Here's a shot of the scene in question; the 'RYBERG ELECTRONICS' stenciling is still visible: 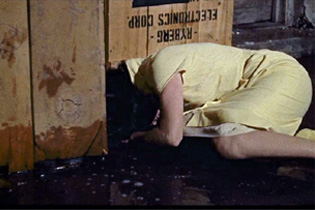 This Island Earth was also made available in shortened form for the home viewing market as 16 and 8 mm films under the title War of the Planets:
Weird Al Yankovic is an avowed fan of This Island Earth, going so far as to include an interociter in the video for his song "Dare to Be Stupid." Check the video out at the link below: 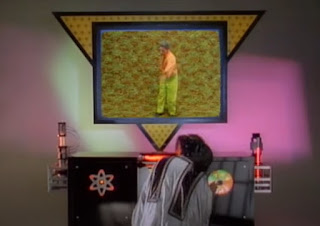 As we mentioned in our episode on The Man From Planet X, director Joe Dante included a host of classic sci-fi monsters for cameos in his movie Looney Tunes: Back in Action. The Metalunan Mutant appears among them in this scene:
The mutant also appeared as one of many classic monsters re-envisioned by make-up artists Rick Baker to populate the featured aliens in Men in Black III: 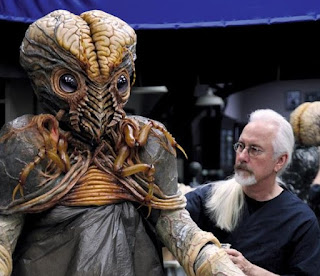 Of course, This Island Earth's most notable legacy is probably its inclusion as the movie being riffed on in Mystery Science Theater 3000: The Movie. Here's the trailer:
Thanks for listening!
Posted by Cinemaspection at 4:57 PM