While we try to cover as much as we can in our episodes, there's always more to see, hear, and read about a movie that can enhance your viewing experience. If you enjoyed our episode on Time Bandits, here's a few extra bits you might find interesting... 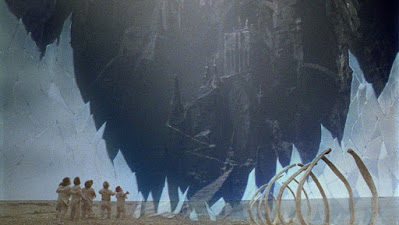 Here's the hilarious original British trailer for the film:

In this bizarre interview segment, director Terry Gilliam and actor Craig Warnock are warned against spoiling the end of the film by some special guests:

We mentioned that the late David Rappaport, who plays Randall in the film, was set to appear on Star Trek: The Next Generation but his role had to be refilmed with another actor. Here's some footage of what Rappaport's part in that episode, "The Most Toys," would have looked like in comparison to his replacement Saul Rubinek:

If you were curious what that weird-looking troll from the Time of Legends sequence looked like up close, here is his appearance in the 'Find the Fish' scene from Monty Python and the Meaning of Life:

And here's the complete novelization in audiobook form:
Thanks for listening!
Posted by Cinemaspection at 6:27 PM