While we try to cover as much as we can in our episodes, there's always more to see, hear, and read about a movie that can enhance your viewing experience. If you enjoyed our episode on Santa Claus: the Movie, here's a few extra bits you might find interesting... 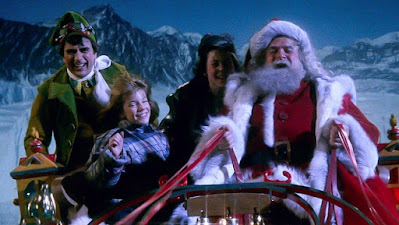 First, here's the trailer for the film:

Here's the full song "It's Christmas All Over the World" used for the end credits of the film, as sung by Sheena Easton:
The tie-ins for Santa Claus: The Movie with Coca-Cola and particularly McDonald's were everywhere leading up to the film's release. Here are some of the TV ads offering reindeer ornaments and storybooks with McDonald's purchases:
Here are some images of the McDonald's Happy Meals and storybooks marketing the film: 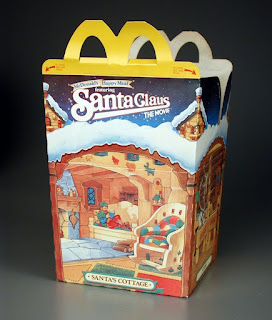 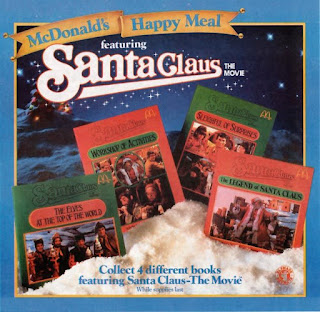 And here's the official Santa Claus wrapping paper we mentioned in the episode: 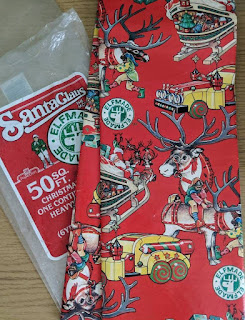 While there's some debate about the appeal of Santa and his elves' traditional toys, what were kids eager to find under the tree for Christmas of 1985. This vintage news report takes a look:
With its subplot about dangerous toys on the market, one can't help but wonder if the characterization of B.Z. in the film was at all influenced by this hilarious Saturday Night Live sketch with Candice Bergin and Dan Aykroyd from 1976:
Thanks for listening!
Posted by Cinemaspection at 6:06 PM