While we try to cover as much as we can in our episodes, there's always more to see, hear, and read about a movie that can enhance your viewing experience. If you enjoyed our episode on 20,000 Leagues Under the Sea, here's a few extra bits you might find interesting... 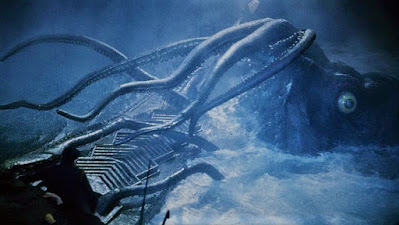 The first film adaptation of the story was made by Universal in 1916 and featured some sophisticated special effects and underwater photography for its day. Check out the complete film below:
One thing we forgot to mention in the episode is that this film also marks the first screen appearance of Charles Grodin, who we discussed in our previous episode on Midnight Run. Grodin can be glimpsed for a brief second as a drummer boy on the Abraham Lincoln:

As we mentioned, the original version of the iconic squid sequence was filmed to appear at sunset in calm weather, with a mechanical squid that was not realistic enough for either director Richard Fleischer or Walt Disney. This is a recreation of what that original version of the scene would have looked like using behind-the-scenes footage:
If you saw the film on The Wonderful World of Disney in the 80s, you may remember this introduction by then-Disney CEO Michael Eisner from the 20,000 Leagues Walt Disney World ride:
Speaking of the ride, as Corinne mentioned the ride had a lot of problems and wasn't considered the most technically spectacular of Disney's attractions. Here's a compilation of videos chronicling the now defunct ride so you can experience it for yourself:
And here's the currently-operating 20,000 Leagues ride at Tokyo Disney Resort:
There have been several attempts to remake the story, including the project we mentioned that was to be helmed by McG. The production art below shows some proposed costume designs for Nemo and the Nautilus crew: 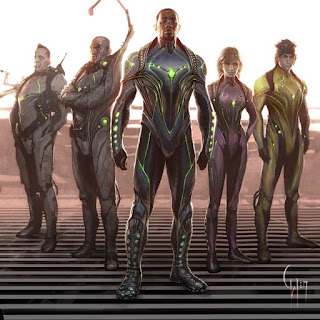 Thanks for listening!
Posted by Cinemaspection at 10:05 PM